The Curiosities of Aging 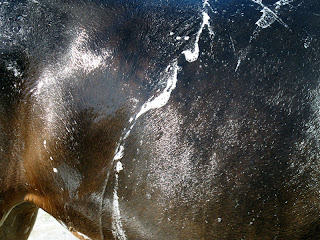 I thank you for still reading my blog...I'm very appreciative and quite surprised. Tonight I decided that instead of sitting here, cold, at my dog sleeping on my lap to warm us both, I would read blogs and that's been good.

Night isn't something I like and the fact that it starts at 4:30 is seriously worse. And it's cold. And I'm surprised to be a person who puts plastic on the windows and tries to conserve heat. In the morning it's 55. My bedroom has no radiator. I open the door at night so the heat from the rest of the apartment comes in after having lowered it to the night range.

(The daughter my mother had planned to raise before she died too early would not have to put plastic on the windows. Why does this still matter to the person I've become? Class, economics, one's station in the world, having a PhD against not even having a Master's or knowing whether an apostrophe should be put in there. So interesting, issues of class and social/economic standing in a country which seems to pretend there are no serious class differences....)

And if I come back here in late in the day and have had the heat down to 55, it's cold. And it takes too long to warm up. And I waste the evening. I am quite sure that I can afford to have the heat on more and higher. But there was a strange transition when I bought a little two family house and moved from apartments so hot that I had to have the windows open in winter to a place where I was paying for my own heat and managing all the upkeep. And I notice that everyone I talk to who lives in this little, poor (as in economics) city tries not to start using heat early...and keeps it low... I've bought into this pattern. And damn, oil is expensive!

Recently the fellow who acted as the grounds keeper at our community garden told me that he'd decided I was a bit senile ... because I went to a garden meeting on the wrong day. But then he saw my website and  realized that I'm not. I found that extremely funny....

(But it's time to make a laminated card stating the fact that I've never remembered more than five phone numbers at a time, even when I was seventeen, and that I've never, never been able to remember a list of unassociated words. Just tell me a story and see if I can repeat the gist of it in ten minutes.)

And then I had lunch with a friend who I haven't seen in, maybe, thirty years, as in seen to sit and talk and have lunch and get reacquainted with and she said I look terrible! I'd thought I'd finally come into my own with a pleasantly worn, forlorn face (no longer puffed with prednisone so the scars and lines show again) and with interestingly straggly hair. My  hair makes me look like a witch,, she said...    (LET ME BE CLEAR THAT I  DID NOT MIND THIS COMMENT ONE BIT.  IT WAS INTERESTING TO HEAR WHAT SOMEONE REALLY THINKS. I LOOK FORWARD TO SEEING HER AGAIN, TO CREATING A REAL FRIENDSHIP...A RENEWAL...)

A quilter I interviewed last Friday was one of the two who started the group around 1989. She has a fast smile, a gravely voice and is perfectly gorgeous, tiny and wrinkled, with beautiful fingers that are delicate and graceful. She's legally blind now, macular degeneration that's progressed until she can only see contrasts and large shapes. When she met me, she leaned down, inches away from my face, but then navigated easily through the room where I interviewed her. She's full of life and, but for this little detail of the eye sight problem, ready to go, happy to have lived in a high rise here in Chelsea for thirty years where her neighbor, a newcomer of twenty years, drops in to ask whether she needs this or that. After starting out making shoes, she worked as a stitcher (for a while she sewed motor cycle jackets, but also purses, shirts, slacks, dresses, you name it), a job she really enjoyed because of the other women working there. (It would be terrible to work all your life at a job you didn't like, she told me.) Briefly she worked in salons, but that involved wearing fancier clothes and taking on airs, so she went back to stitching. Unfortunately, she's given up the quilt group and was only there for the holiday lunch.
Posted by melissashook at 6:33 PM 6 comments:

How many lasts are there? 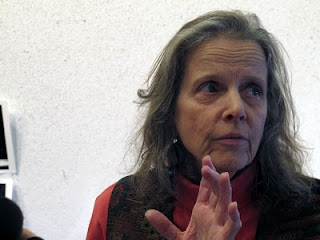 Usually I end the blog by apologizing that I haven't been reading blogs for the last many, many months, much less writing on mine. This time I'm starting this that way for anyone who is still reading what I say...thank you...
I do think about lasts. Was this the last class I will ever teach? When will I buy my last car? Is there another dog in the future or is it too late? When I'm really in bad shape, I think of last hours or last minutes and which is followed quickly by regretting all the time I haven't valued...

The photo was taken by John who was using my camera on the last Tuesday class. I honestly can't imagine how fast this fourteen weeks has gone and was caught entirely by surprise this week. It's as if time is speeding up, but then everyone said that. It was quite a group, such interesting work. I've been trying to write a bit about teaching -- like the student at MIT who was fretting over whether his print should be mounted a sixteenth of an inch this way or that way and asked me so many times that I finally said, "What does it matter in terms of eternity?" and he said, "That's the nicest thing anyone has ever said." (meaning I think, anyone who was teaching him, but it also could have been about all the people who were pushing him.

John, who took the photo, happened to say just what I think during class -- don't think about all that stuff, the perfect division of thirds...(I can't remember the other rules he mentioned because I've never read them...) He was emphasizing the intensity of interesting images, odd, oblique, not carefully fashioned. He also likes to make zines and give them to folks...to friends.

He mentioned a book project I taught as a way of starting a number of classes with because no one does any work during those first two weeks -- a one page fold-book that involves one cut and five folds. I actually found the book he'd made during that class and meant to show it to this group, but I never did.

I used to make Xerox books and send them to friends...just pages folded horizontally or vertically and bound with a pamphlet stitch. That was in the olden days when cutting and pasting were necessary.

Now it's  easy to combine words and images and then print digitally with double sided heavy matte Epson paper and have the whole thing spiral bound...we used to dry mount the photographs together to create the back-to-back pages.

I wonder when I will make my last book. I made two this semester, small accordions, one with drawings of scrabbly nude ladies and the other with a photo, both with writing. But I haven't put the covers on.

Once I submitted poems to a fellow in San Francisco who made them into the tiniest books possible which he left around, here and there. I was so delighted when he used one of mine and send me a tiny packet of other books he'd published.

But back to the class...the student from China who had taken classes in critical thinking and is putting what he learned to good use. He's leaving for Philadelphia where he'll get a scholarship and a better education. Imagine being here, all on his own, absorbing such a different way of viewing the world.      And the musician who is a scrub nurse who worked diligently on a project, self-motivated, entirely internally directed, all semester. Just what I approve of. And the woman who came into class thinking she couldn't take photographs. And the guy who had been in the army in Kosovo. The two young women who went well beyond their comfort zones on the second projects -- always important in my way of thinking, far more important than accomplishing something that a student already knew how to do. Someone said she felt privileged seeing all the work that had come together. So did I.

The class was meaningful. A punctuation of my week. One I hadn't expected to teach. But I was preoccupied with proving that I've fully recovered and can do my own work...the show of garden photographs, then a video about a garden party in early September. Recently it's been a video about group called Youth Build  -- giving seventeen to twenty-four-olds a chance to graduate from high school with a week in classes alternated with a week doing construction work for low income projects. My video isn't finished, but I have a rough cut.  While I'm waiting, I started another about a small  group of women who have been making quilts at the Senior Citizen Center since 1989. They are quite precious and are carriers of a great deal of Chelsea history, including one story of making sections of armaments in WWII.

Posted by melissashook at 4:42 PM 7 comments:

Email ThisBlogThis!Share to TwitterShare to FacebookShare to Pinterest
Posted by melissashook at 4:27 PM No comments: