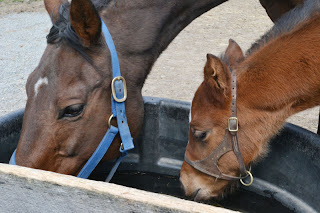 The impetus for this particular post came from my attempt to publicize www.run-to-the-roundhouse-nellie, com, the memoir site brainchild of Susan T. Landry that I'm working on, also...

Never imagining I'd have any luck, I fooled around on the web for memoir sites and memoir groups and found Pat McNees, whose link I hope to attach...  Remarkably, she's not only a writer/editor and involved with memoir, but also has a blog on decluttering which is part of her larger concern with death and dying, how to allow us to accept this inevitability with more grace or ease. That preoccupation came from time spent with her father when he was dying and has led to a great deal of work on her part, including a book. You might well want to check her out if you're interested in memoir, writing, hospice, clutter and so forth.
http://www.comfortdying.com/blog.htm?post=905971   This is the site for cluter...on her comfortdying site.
http://www.writersandeditors.com/blog.htm
http://www.writersandeditors.com
http://www.comfortdying.com
http://www.patmcnees.com
I am inspired to declutter in part from my experience after my father's death when it took 5 or 6 people and almost a week of working full-time sorting and tossing. I knew how much my step-mother had collected over the years, long before she was unable to think and reason. But I imagined that my father with his spare habits would have left next to nothing. No so. We had many laughs, a lot of good meals  and felt considerable dismay an attic of useless things she's bagged, tied and stashed and in the basement, the chairs he'd meant to cane, but forgot about and all those bottles for making wine, etc.

I don't want to leave that caliber of mess for my daughter and so decluttering means, to some extent, thinking about death, my death. But it also centers around the idea of  moving, so there is an underlying positive motive lurking under the massive weight of it all.

But it's slow going. I've thrown out reams of paper from piles I thought I should keep. And have moved files from shelves into the empty space in the file drawers. I have labeled them all with large letters in black and categorized -- a major learning leap. I know it seems crazy to most people to stick (labeled) files into the drawers without any system for easily finding them again, but there you go. That was how I did it for umpteen years. Until this week.

And I liberated a narrow basket under the table (along with two large ones) which contained four thick files of poetry notes from my mentor, George Kalogeris, a gentle man with a quiet voice who provided the backbone for all that writing during a period of four or five years. His neat pencil tics next to lines he liked, his brief suggestions, so important.  What mattered most is that he respected my voice and all its quirkiness. I saved those four thick files, unable to part with the sense of George. But today I'll throw them out since there's absolutely no sense in hanging on to them. I've long ago incorporated his suggestions and I certainly won't look at them again. Why hang on?

Why hang on is the question that dances around every object I pick up, each piece of paper. It's a complicated one. I couldn't learn how to think about this without the pleasant woman I'm paying standing here, talking, looking, offering suggestions. There are many, many good books, some of which you will find listed on Pat McNees' blog, but I don't learn from books. And breaking the habits of the typical adult child of an alcoholic who has lived through and by chaos is very difficult.

I'm skipping two weeks of supervision, but look forward to what I'll learn during my next session. 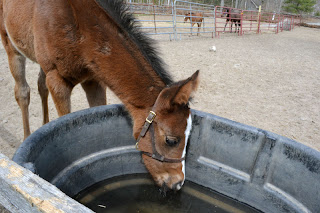 In the meantime, I went back to work on a documentary on George and Arlene Brown's Thoroughbred breeding center. We went down there on Sunday to see the newest two babies and I'm hoping to catch an actual delivery, though that's hard to time since they happen between 10pm and 2am. Someone is always in the barn, waiting for signs of a potential delivery since the mares often need help. In the wild, 50 percent of the foals die, as well as some of the mares because the baby was wrong-way-round and the hooves penetrated her uterus and stomach.

Woody is drinking, or at least looking at water, with his mother and Wilson, a bit older, is at the water bucket on his own. George couldn't stop talking about what a marvelous creature Woody is, but I know knowing about horses and can't tell a thing. Best I can do is figure out which kitten is the largest in a litter. 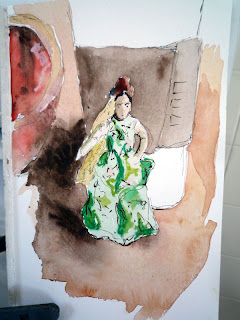 And water colors are a fabulous distraction. So relaxing. I've started using little talismen that I've kept around over all these years, propping them against a Starbucks cup as a scale, drawing and painting them. And just started self=portraits! 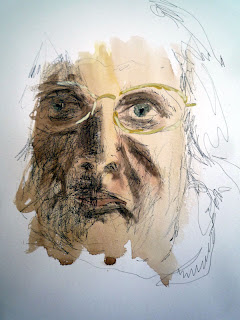 Many of the files on these shelves have been transferred to the empty file draw spaces, but not all of them. I'm not finished with this room by a long shot. Damn, it does take so much time. 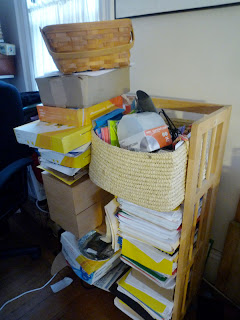 Posted by melissashook at 7:49 AM 2 comments: