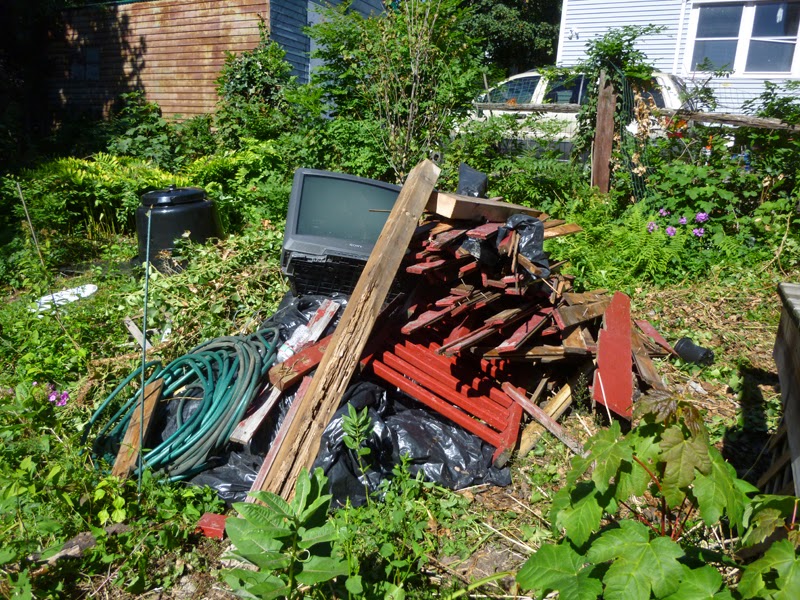 So, I have very little time since I'm going to lunch with Elsa Dorfman and have to stop at FedEx to mail a box, but here I am, trying to add to the blog which is tucked so far in the back of my mind that I hardly remember it.

But, I stayed in the house, thanks to Genevra, who agreed not to force me to sell because I'd signed papers agreeing to do that. And I spent money on it for the first time.  Oh, I'd put on two roofs and replaced an oil burner and fixed the downstairs bathroom and had my bathroom floor repaired when the toilet threatened to fall into the apartment below…

But I hadn't done anything else. I hadn't decided that this is my house, even though I've lived here for 30 years. It was still temporary with all my collapsable furniture and clutter.

But Elsa suggested Delson, the most magnificent contractor imaginable. I didn't imagine that I could afford him. But he's reasonable and has lovely Brazilians working for him -- his son-in-law, two nephews and various assorted others who he's hired. The first photo show the remains of the porch that he thought he'd just have to repair, but that I knew was in dire shape.

For years, Joe and Pam lived next door with his parents. Pam did a lot of work on the garden, in the yard, which was undone by the folks who bought it. They even took down a pine tree taller than the house that his mother had planted when he brought it home in a styrofoam cup from kindergarten. Pam has volunteer petunias and offered me some, but I somehow never got around to take them. But here's one that was growing by the sidewalk and I dug it up with a spoon, at night..   There was another one, but two days later, all of that was clipped. The folks next door like everything clipped.  So, here is the petunia in a tiny garden that I started in all the madness of having done nothing, nothing, nothing to the back yard when the house was supposedly going to be bought as was. 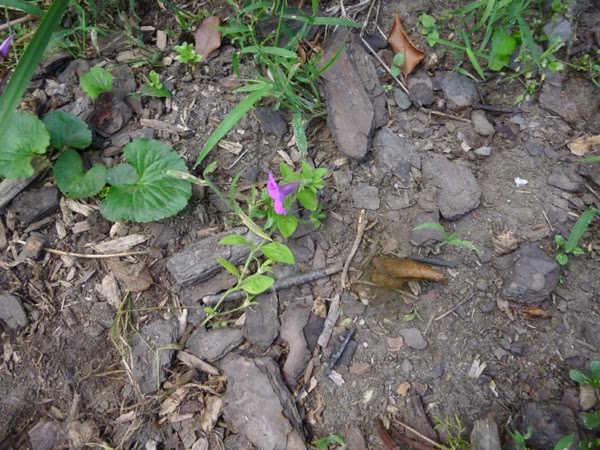 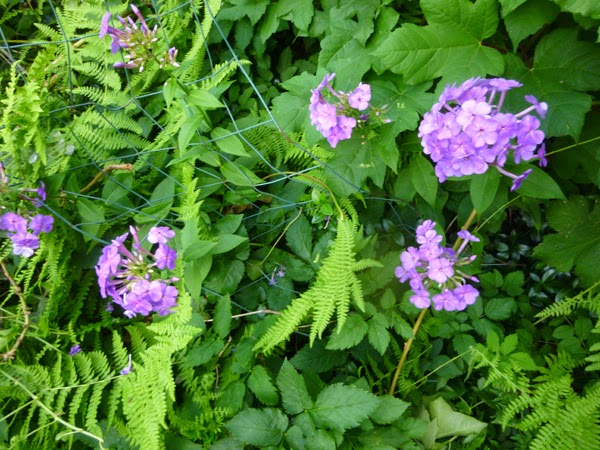 And this is the phlox that's growing wild back there. I fell down the backstairs on my way to transplant it…madness of madness. Why?

I ended up as a pretzel with my legs lodged above my head in the twist of the stairway. I am lucky to have only gotten a swollen ankle and a limp for a few weeks. Needless to say, I didn't transplant it, them, anything. 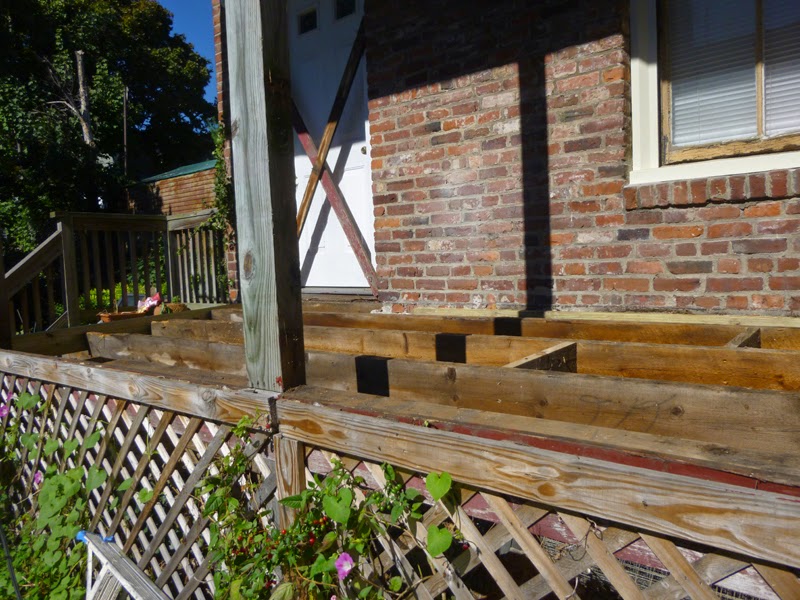 I had imagined that it wasn't going to be an easy job. The railings had not been up to code and I thought that a family with a young boy was going to stay in that apartment and wanted that fixed. This is what it led to, a very elegant downstairs porch. Nicely stained.

And then the upstairs porch was stained, in the nick of time, because the pressure treated wood was parched and starting to crack. 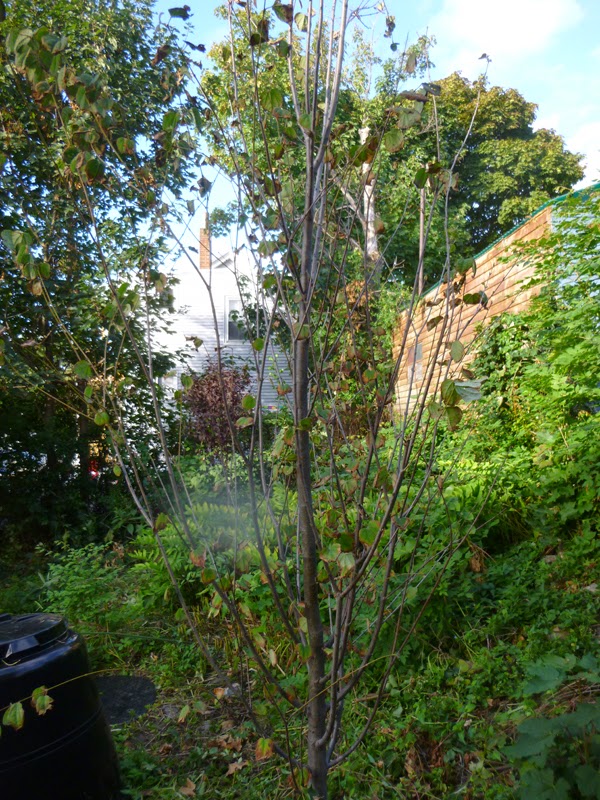 An agency for Massachusetts was giving trees, planting them, with just the stipulation that I water them every week for a year.

I wasn't pleased with this particular one which looks half dead, but she assured me that it will be fine in spring. They put in five, including this one. I wanted to replace the lovely cherry that finally gave up, two cherries to be exact. One used to hang over the driveway next door and Joe's father used to pick cherries to put in brandy. No such luck now because they had no actual fruit trees and I wouldn't have bought one because I can no longer dig a sufficiently large hole and dump in humus. 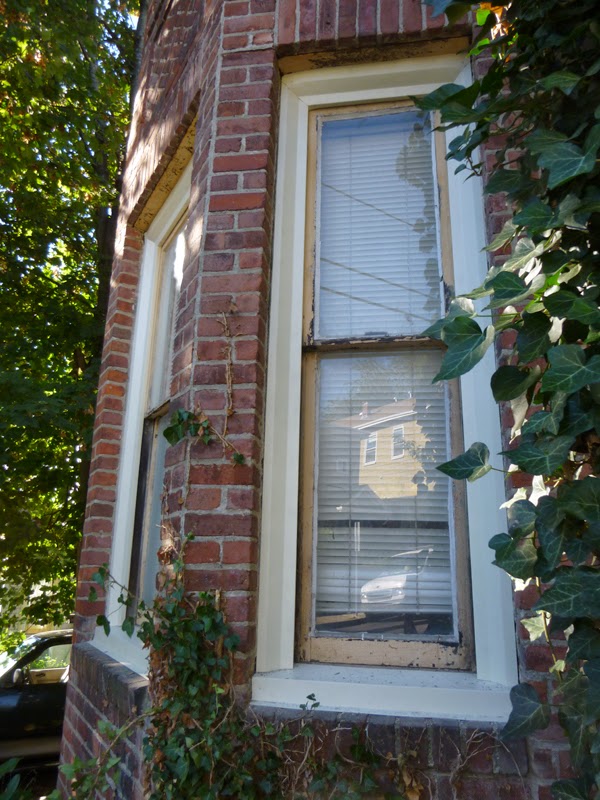 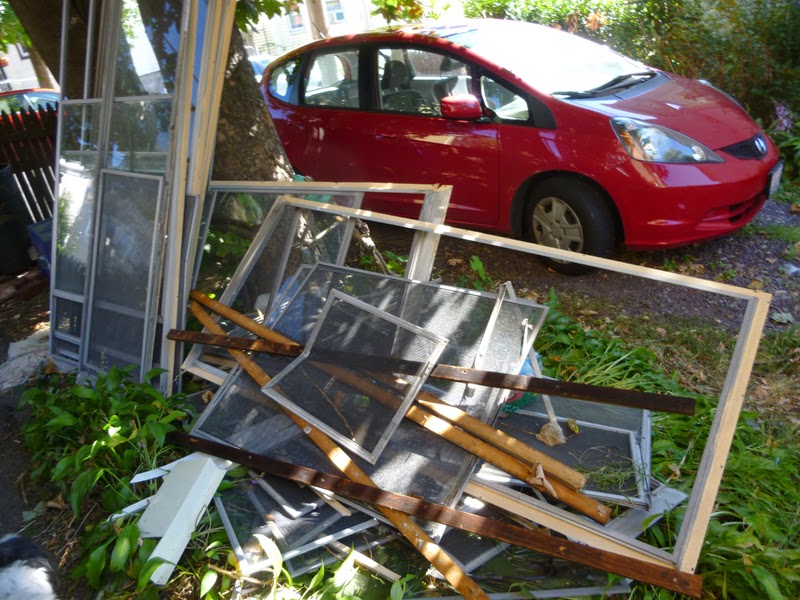 The new double pane windows might save me from paying $700 a month (or more) for heat in this little apartment. At any rate, they look gorgeous, though the photograph doesn't show them..that's just the covering of the outer sills..which took Alex days to cut and bend and fit into place...the windows were inserted after that was done and then there was caulking.

I felt terrible when the guys left, as if they were leaving home. They had a strange sweetness, as if they weren't judging me or my house, just trying to make it better.
Posted by melissashook at 7:14 AM No comments: