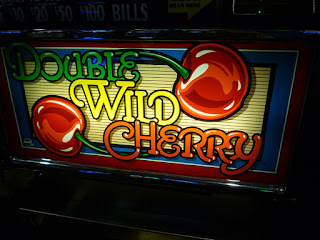 Going to Foxwoods on the bus with folks from the Senior Center isn't nearly as good as taking a vacation with Nance and Wendell in Tucson, but it will have to do and it did...   Earlier on in my life, when I was a steady rebel, I could not have imagined myself doing this, but something in me said, why not, and I did....Eileen and I went together and were taught the ropes by Mary. We are all Empty Spools Quilters...and sometimes Eileen and I do things like when she came with me to video tape Jean who has macular degeneration, is 90 and does just fine, thank you.

Eileen and I have the same sense of humor and amuse each other. I doubt that anyone else finds us funny or understands what we are laughing about.

$18, a bus that leaves at 7 and gets back at 7, free buffet, all you can eat, and table service by a woman who has four children, all boys, the two oldest are in college (one is at Texas A&M and studying something like space engineering) and the youngest is three.

I paid $10 for bingo which I will never, never play again. It takes a type of brain organization that I don't have -- quickly reading the numbers under B, for instance, from the upper left, down, up, down again, up, across the six cards (many people have many more...) I'm absolutely not that organized, since my mind jumps around, here and there...   So I played a bit, then walked around, and then went back and played again and then gave up entirely. 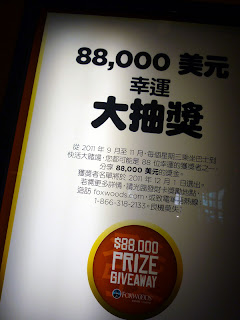 This is the only sign I saw that wasn't in English. That means none of them were written in Spanish at Foxwoods. Our bus was slightly more full of people who speak English. Eileen and I sat at the divide between the groups and I tried to eavesdrop with my bits of newly acquired knowledge. Sharifa, who is from Afghanistan, sat in front of us. 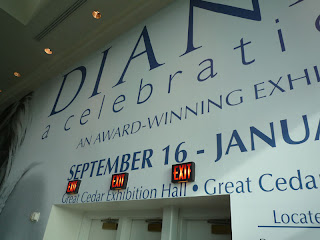 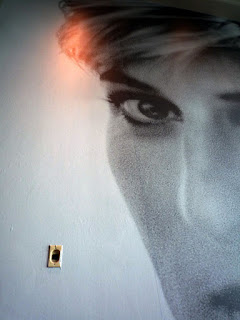 I walked over to the Grand Hotel, thinking I might see the Diana exhibit. There was a long, long line of quite properly dressed ladies, a long, long line. I might have paid the $20 if the line had been shorter.

One of the things I found out in the hotel is that they provide no comfortable chairs, none. All straight back or benches. I wanted to sit down in an arm chair, the kind they always have in hotel lobbies and in Starbucks, and write.

Late in the day, I discovered that you can put a five dollar bill in the penny slot machines and it takes a long time to loose money. I didn't have time to play, so I only lost a dollar and some cents, but I could happily have played for a couple of hours, slowly loosing my money. 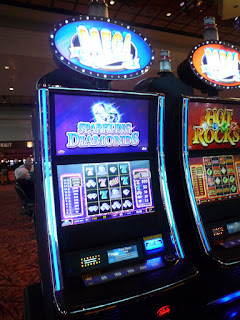 Mary's sense is that there were so few people because it's near the holidays and people don't have the extra money to spend. Usually the huge bingo hall is filled for the Early Morning Special which costs $10 to get the basic package, but most people buy more inside. Mary had all the equipment, the daubers, etc. We were delighted that she won a couple of hundred dollars...

At one point Eieen and I walked around, past endless shops, into a fantastic Chinese bakery and then into the poker hall where all the action was. We decided that I really couldn't take photographs there and that my presence had been noted by ceiling cameras in the slot machine parlors, but that I was considered harmless in those almost empty rooms.

Anyway, the poker rooms were where I would have wanted to be if only I could play poker. But my aptitude with numbers, games, logic is minimal and that fact makes me furious because it means I'm so much less intelligent than my father who got his PhD in math from the University of Chicago, undoubtedly as if it was just the next thing for a poor guy from the mid-west to do. He was extremely intelligent and very logical and I, at least, got to observe manner in which that sort of person goes about managing practical tasks when he's not pickled in Scotch.

Later we learned that Sharifa had spent her day playing poker. 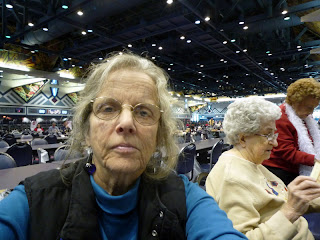 One of the changes in my face is that the fat that's under the surface when a woman in producing hormones vanishes when she isn't. It's very strange to see the scarring, now, so obvious. When I had that bout with ulcerative colitis and was taking prednisone, it puffed up pleasantly and I'd lost so much weight that it didn't look fat, only filled out.

Who can imagine the changes ahead? 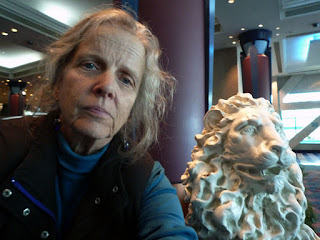 This self-portrait was quite purposeful, next to one of the two lion statues that were near a large plastic horse drawing a sleigh that was next to a huge Christmas tree. There were many decorated trees here and there, but the space was so massive that their presence was diminished and it was possible, almost possible, to ignore the Christmas carols.

I also took many photographs of myself in the bathroom with oval mirrors framed in gold.

Eileen said that I'm like a jumping bean, always getting up to do something else and constantly eating. Even if I'd liked bingo, I couldn't have sat there for two and a half hours. When we were walking in, a woman told me that going to bingo was so restful for her, took her mind off of everything.

If I went again, I would take the free shuttle from the hotel to the Pequot Museum. That would be interesting and I'd be happier to pay $20 to get in there than I would have been to pay $20 to see Diana memorabilia, though I would have gone in as a lark had the line not been so long.
Posted by melissashook at 4:24 AM 2 comments: