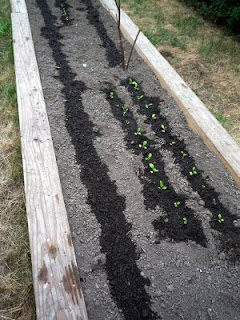 that I not only forgot how to get into my blog, but wrote this whole damn entry in another blog that I started for a friend with my photographs who never used it, but happens to still reside in my folder.

So, all this has been said -- the reasons why I've not been blogging, but instead making local videos and taking local photographs supported by two small grants that pay for my expenses. And for the last two weeks, I was working with a smart, young woman who just graduated from Tufts, who really knows Final Cut Pro and also explains various technical aspects that I need to know. She speaks in a quiet voice, watches as I write her instructions down, tests me and doesn't make a fuss when it's obvious that I haven't remembered whatever she just taught me. Maybe she's thinking about leading an old horse to water, but perhaps she's just a patient person. No one of her generation would take a second to learn the simple computer tasks she's trying to teach me.

Each day she's uploaded our rough cut onto Youtube and friends have generously watched it and given us feedback. I can't thank them enough for all their time and effort.

As a meditative pleasure I walk a couple of blocks to the local Temple in the early  mornings and early evenings, unlock the gate with the key that Aweis gave me, and pour cups of water onto the spinach seedlings that I've gotten him to call the little guys.

If I knew what my last blog was, written so long ago that I have no way of remembering, I'd know if I introduced you to him -- this remarkable Somali Bantu man who learned English while he was in the detention camp in Kenya and came here to become a community organizer for his people, along with having another full time job. 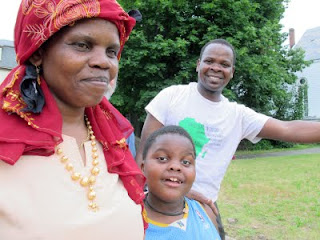 At any rate, he's my hero. Not only because of what he, and so many Somali Bantus, have endured, or because of his remarkable ability to convey something of his story for what will be a local video tape, or because of his gentle, steady way of moving this garden project along, but because he carries two buckets around the block to the spigot on the other side of the Temple, climbs the steps, jumps over a low wall, fills them, hoists them up, climbs up, and carries the water back around so that he can dip cups of water onto the plants. He kept all the purchased and donated vegetables alive during the heat wave. And now I'm adding to his work by having convinced him to transplant many of the seedlings that were tossed as seeds in a bunch rather than planted in a row during that first day of planting when Fatima and her son, and some of us from the Community Garden, got this things started.

The little Spinach guys were calling out to be transplanted and there was a serious need to fill up the third plot, so that's why this folly of transplanting them and of planting more seeds of mustard spinach and chard in two rows that are marked by sticks. To my absolute shock, one of the rows of seeds has already sprouted and most of the little guys have lived.

It turns out that it's necessary that this mother duck that I've become waters them twice a day. I missed yesterday morning and a few died. But I'll go there after I finish this and again this evening. And then I'll try to figure out how to get more water since he left six full buckets which I'll probably use up before he's able to get back on Monday evening after his full time job.

I find this meditative and pleasurable. And am so glad to have a manageable task. I could go to the Community Garden and work on  my bed or I could try to make the tiniest inroads on my own yard which is a wreck and a tangle. But I'd much rather just walk to the Temple with my dog and pour cups of water over the little guys.

Aweis has a large goal -- to make this a viable garden for Somali Bantu families. He needs the experience of this first year and then to engage more families in the process.

My goal is to get the third plot to display some visible success because I am interviewing two of the ladies from the Temple this week for my local video about this project. I want them to see some success with the hope that they will want more garden plots in that large, empty space that's seldom used. 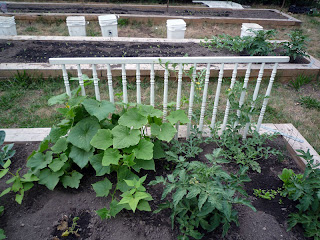 I have been teaching Aweis some Americanisms. One is 'happy as a clam' which I am when I'm pouring those cups of water. Another is 'a hard row to hoe' which is easy for him to adopt since he would have been a farmer had he been able to stay in Somalia. And the other is about staging a house if you are trying to sell it. We are staging that garden. We've both bought some additional plants -- tomatoes, peppers and marigolds. And are making an effort with the little spinach guys.
Posted by melissashook at 4:29 AM 3 comments: