The dogs have had a difficult time going out. There's too much salt on sidewalks for them to walk very far without pitiously holding up a foot and protesting. Of course, I only know this by hearsay, since Krissy has walked them since I'm dearly afraid of falling on the ice. She's also shoved a patch and a path so they can go out in back.. 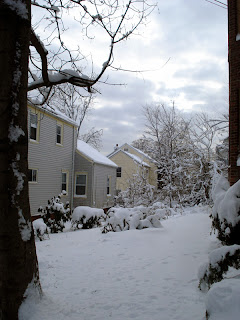 More than fifty inches of snow in a little more than a month. It's discouraging, on one level. Friday was another storm and I missed video taping the ladies who have been making quilts for babies in the ICU since 1989. I've finished a rough draft and was certain that I'd get the chance to tape many versions of quilts to cover the interview with Jean, one of the two women who started this venture. She's rarely there, but I got the chance to tape her just before Christmas because she was going out to lunch with the group. Macular degeneration has made it impossible for her to see more than contrasts and large shapes, so she finds it hard to be there where she was the small-detail guardian -- correcting any mistakes and noticing hanging threads from across the room. She was a stitcher for her working life, a job that she felt really good about. I'd bought three packages of cookies (not being able to decide which they would like most even though I know there will be a fuss over so many.) 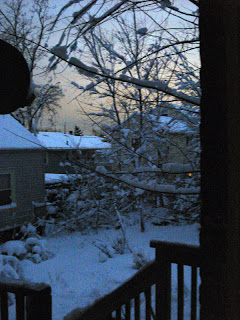 On the other hand, the snow has been quite remarkable. I wish I could figure out what to 'do' with it. A few years ago, a friend said that she wanted to photograph the last of the knobby drifts and make prints (as in etching, not photography) from those sculptural shapes. I've wanted to photograph a particular set of small evergreen bushes that are planted along a fence, hiding a metal-collection center. They're wrapped in burlap for the winter, sort of like a conceptual piece.

But I haven't found anything really interesting or thought of how to use the mounds of snow. What good is anything if you can't use it? I used to know a financially-exhausted painter who photographed the meals he was invited to...stood above and took a black-and-white images of the full dinner plate. I doubt he ever did anything with that series since he was, basically, a landscape painter though he occasionally painted folks in orchestras. They were rather small, somewhat old fashioned, quite touching if conventional, images. 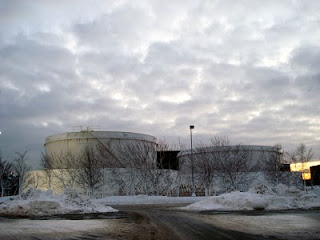 This is actually a place that i think is remarkably beautiful. There are reeds if you get closer to these two tanks..so it's tanks, reeds, trees, a fence and pavement. It works for me. With the clouds or without. And it was more perfect because of the snow on the trees, but I didn't walk close enough to specialize in that image. This is as good as nature gets. (I'm not overly fascinated by nature and certainly not by photographs of nature even though there are endless reruns on PBS by Art Wolfe (sp?) who treks to distant places to make art. I like to listen to his stories, and particularly liked the program that showed how he and his support group manage a shoot, but I don't find the images interesting at all. I'd prefer drawings. 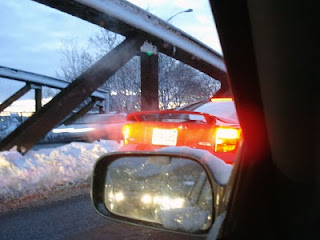 This is a particularly interesting bridge. My new routine is to walk on the treadmill at Planet Fitness for 35 minutes, drive out to Target, across from the track which is all closed down, and buy a grande latte. That's with the hope that it will keep me going so that I can actually use the evening for work. I hate night. I don't like dark. Or cold. And it takes a lot for me to not waste it by lying around, watching people murder other people on TV. But this plan seems to work, most of the time. The view as I cross the bridge, the latte in the cup holder, as I am close to turning down Revere Beach highway and it's already dark or getting dark since we've passed the solstice and minute-by-minutes it's staying lighter later. 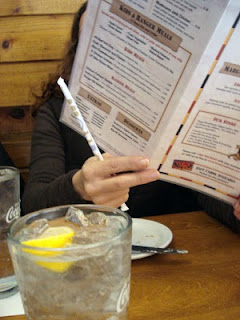 Krissy's birthday. We went out to lunch. She is still as good as she always was, making the absolute best of not being where she wants to be. She's always been a sport...when she was a child, it took her five or six hours to open Christmas presents -- she gave so much attention to each one, small or large, important or seemingly not. And on Halloween, she gave candy to the folks who gave her candy, at least until the year she went with other children and learned she was supposed to keep it all.

I often skip e=mails, don't pay attention to facebook, generally behave in a wretched way so it was extremely bracing to realize that I'd ignored one message from a close person,  telling me that she'd gotten sick again. I hope this chastening will work and that I'll pay attention! I have no idea why I'm like this and know that apologies don't work for ignoring an important message. Or for not being in communication enough. There's no explaining this bad habit.....hopefully change is possible.

Does anyone know how to capture one's own blogspots? I tried what a friend suggested (selecting and copying to a folder on the desktop...I couldn't select one entry, etc.) and that didn't work....
Posted by melissashook at 12:11 PM 11 comments: 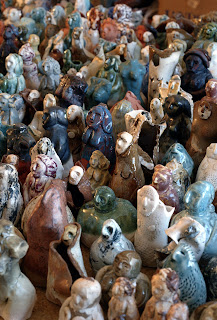 that I'm really courting identity theft through my website? Have times changed so much that my obsession with telling my version of my story is no longer a good idea?

I used to think about how much my grandparents had seen of change and the about how my father had rejoiced over Darwin and Freud, driven a Model-T, gotten a PhD, bought a small black-and-white TV a bit after they came out, got his Ham Radio license when he was in his seventies and built a radio shack in what had once been the TV room in their house in Nova Scotia. He would use morse code to communicate with other radio operators in god knows where.

I recall the heavy black telephone, the operator who asked what number I, a child, wanted and I always wanted Cinnie Baldwin's number since she was my best friend and lived up the street. I doubt my mother spent much time talking on the phone, and imagine that my father rarely used it when he was home from work, but I don't know. I did watch the TV that he bought not that long before she died, watched Gorgeous George jump from the ropes onto his opponent while my grandfather and I sat on the bedraggled couch, a great spectacle of wrestling on that tiny TV. I had a record player, an early super-8 camera, many, many film cameras which I still have, including my beloved Leica. I don't have many CDs of music, but had videos, now DVD's. I own two computers, having long ago moved from the PC, three printers, (one of which I use for DVD labels) one film scanner which probably doesn't work since it's must be incompatible with my new computer since that's the nature of progress and change. I reluctantly bought digital cameras, two point-and-shoots and one slightly better one which I don't like at all.

My work, until I started to do clay pieces, depended on the documentary approach. And on my website, I explain my work, the origins of it. And I probably give too many details. I'll have to ask the wonderful guy who designed the site.

But my m.o. is saying whatever I want to say, not that it's the truth since nothing is really the truth, all point of view and much distortion, conscious or otherwise, no not otherwise, because I do try to convey something of what I've been thinking about, as clearly as I'm capable of doing. (Though I've lost faith in my abilities -- it's winter, there's snow, I'm not teaching any more, all reasons to lose faith.)

And right now I'm working on the very explicit story of a man who was gay bashed in the 80's. He has many, many stories, very vivid, very revealing, startling perhaps. And I've asked him to give them to me so I can put them in a form that can be seen. Video.

What harm am I inadvertently doing him?
Posted by melissashook at 3:16 PM 4 comments: