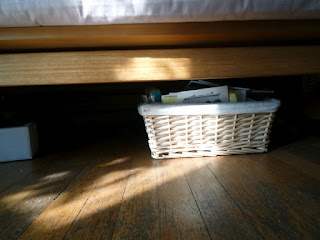 I was inspired by a conversation Mim was having with H. at the Bagel Bards. And then inspired by running into B. at Starbucks. He's quit a disagreeable job and started cleaning out his house, a task that used to be easy, but is much harder due to his health. I had hopes that Ann-Marie would be here and would help me for two days, get me going, but....she isn't. And I got going myself, yesterday afternoon, deciding that two hours would be my limit.

I'd told Mim and H. the story of Barbara McInnis, a folk hero here in the homeless community of Boson, the TB nurse at Pine Street, who had a wonderful song written about her and a respite unit named after her when she was alive. That's unusual. She amassed an amazing amount of clutter, filled all the rooms in her J.P. apartment. Thinking that going to therapy would take too many years to make any inroads into why she was a hoarder, she hired someone for two or three hours on Tuesday evenings, put out three boxes -- to keep, for the good will, to toss out. He would bring her things (she wasn't moving around all that well by then) and she would put them in the appropriate box.

When she began looking at the good will box, thinking that she might save something out of it, she stopped and he took the boxes away.

She was right. At a certain point I did begin thinking, 'Should I keep this?' and stopped, but I'd gotten rid of two of the baskets under the futon. 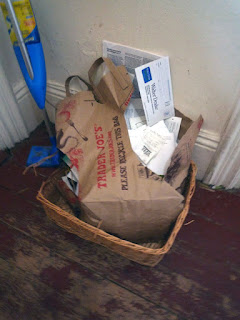 Sherlock broke the bag that I put all that stuff in, stuff I'd looked at four or five times, over the years, not able to throw it out. 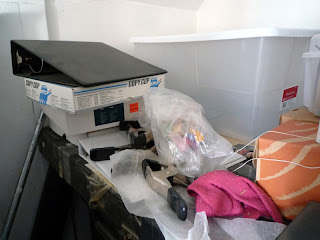 Before I moved out to live with X, everything in my workroom was in order. I could find what I needed. When I moved back here, five years later, everything got dropped where ever. This is a corner that was, more-or-less tools for making books. It's now quite neat. 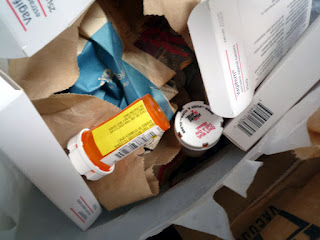 For years I kept every bottle that the Hormone Replacement Treatment pills came in and all the boxes of the Vagifem. They were, I thought, a tribute to menopause and I was going to put the pill bottles in poured clear stuff (I forget the name of that toxic agent) so that they would become an entity. I don't know what I was going to do with the boxes. It was a good idea, I thought... but I'm not a sculptor or an installation artist, though I think in that direction... so I threw them out, except for this bag that was stuck in a corner. Gone now. 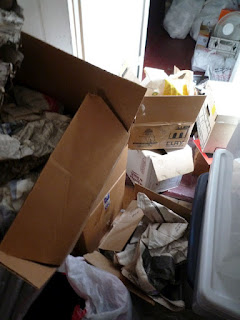 One insanity, but also a great pleasure, was working with clay. I think this came about because someone was going to put my work in a large show so I felt able to branch out and add sculptural or installation work to it. She never did follow up on that idea, but by the time I figured that out I'd done three or four large clay projects which are now upstairs in boxes. When S. visited, she looked horrified -- not only are there cases of exhibition prints and boxes and notebooks with negatives, but now there are all these boxes with stuff inside them. Can't I get a storage unit, she said. 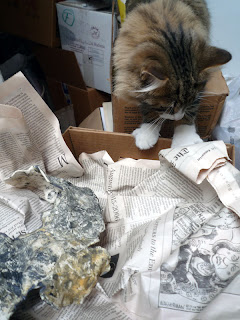 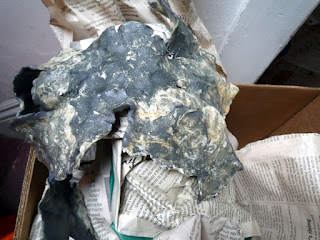 One of the problems I made invovled these blobs...they were great fun to shore up with newspaper and bottles so that the clay would drape and dry....and the pieces, like the one above, fit in strange ways into a disintegrated landscape. I really liked doing them. They were quite ugly and I like that, also....  The boxes in which I'd packed them all were hard to identify because many boxes were labeled blobs...and some of those boxes contain some more interesting blobs that I'm not ready to dispose of yet..... they also make a landscape-like-something-but are slightly more charming and smaller.

But the slithering, corroded and impossible blobs are gone...in the orange bags that we are now required to use in Chelsea if we have to much to contain in the garbage cans. 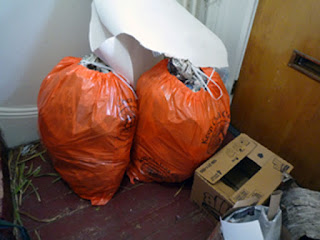 And I lost my new glasses. That was Friday. Gone. My only hope is that Sherlock batted them off the couch and knocked them somewhere, but I haven't been able to find them. Alas.
Posted by melissashook at 9:00 AM 2 comments: