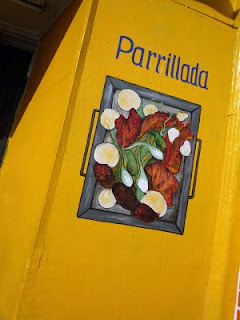 How can you not be delighted walking down the street, seeing buildings painted with signs like this? 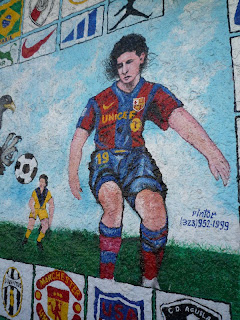 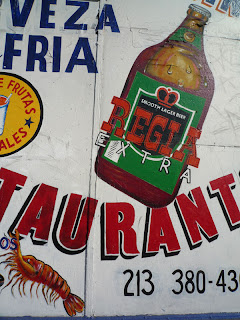 And how can you not gulp when you walk out of a craftsmen house and see more such houses lining a street lined with these palms? 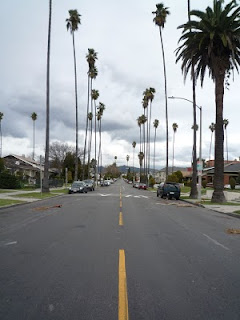 So I fell in love with L.A. I said this before...if I had another lifetime or was ten years younger...I would move there, though a friend suggested I have enough time left to make this change. That would mean I'd just stare at signage and those insane palm trees that serve no practical purpose except to amuse me. Glorious.

I have not filled this whole blog with photographs of Jinx, the most glorious dog, who actually slept with me on my last night in L.A. Large, comfortable, his heavy head sometimes resting on my stomach. This is hardly fascinating reading, but it's such a good memory.

We went to an interesting exhibit of work by Fred Lonidier at the CardwellJimmerson gallery...small space, but quite remarkably hung (I hate to use that phrase, but displayed is even worse) exhibit. I found it very interesting in that his work exemplifies the problems of depending on theory/words/text as the basis. And I truly appreciated the tension between esthetic and meaning as I stood reading (sometimes skimming) three of the, what eight or nine?, pieces of "L.A. Public Workers Point to Some Problems..." The problems are commonplace and, to me, very interesting -- low level, probably not well paid workers trying to give decent service-- a librarian, a teacher (young kids), someone who worked in what we called the welfare department. The struggles, cutbacks, lack of material, poor pay, etc., interesting stuff rather densely presented on, let's say, 4x6 panels (I just checked, there were 11 of them and they are 50x33") with small, prosaic black-and-white photos that I didn't even glance at. I just read. Informative and punishing. I liked that impulse though I can't imagine many people standing there, craning their necks, to read it.

Though my "Streets are for Nobody" was hardly in the same critical vein that Lonidier works in -- since I'm a documentary photographer -- I faced a similar problem with excerpted text interviews that I was told were too long, much too long.  (I would have preferred text panels the size of Lonidier's!) The portraits were quite prosaic, hardly attention grabbing, since I wanted it clear that these were women who happened to be homeless and not examples of the visual curiosities of a shelter.

Back to L.A....the work that I thought was most successful was "The Health and Safety Game," which combined images taken of a number of people (let's say 5) who had been victims of industrial accidents with text about their physical and legal struggles. This was framed, a bit more graphically seductive (that was hardly his intention in the "L.A Public...") and insightful.  Dense. Seriously interesting.

His most recent work, "AZTEC VS A.T.U." was the most graphically interesting with unnecessary bits of design that probably made it more pleasing to someone glancing at that wall from across the gallery...the information was, of course, interesting, political, about a union struggle against a bus company that ended up going bankrupt so no one got anything useful out of the demonstration.    (But I found myself fussing about the extraneous bits, and I mean tiny bits, of decoration....shows how cranky a person can become.) 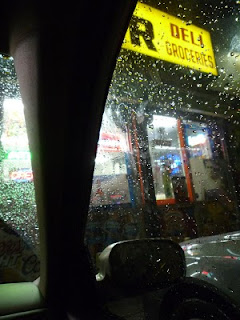 Anyway, it was certainly interesting. I was glad that we went in what was, for L.A., a torrent of rain. I thought of backing out, my usual avoidance tactic, but pulled myself together to be a decent sport -- much to my benefit. 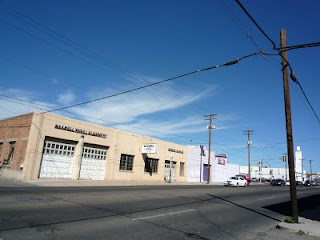 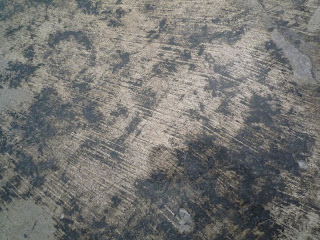 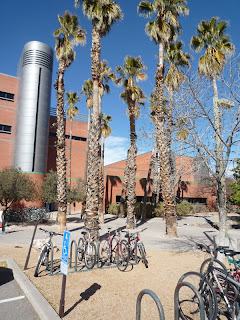 Arriving in Tucson to a dry, flat (in terms of color) landscape is a shock. It's not yet spring so whatever bits of color will sprout from the cacus are not yet visible. This first photograph is at the University of Arizona...

It's probably more realistic to think of the last of my lifetime here with manageable driving and one or two months spent indoors under an air conditioning unit.

We went to an exhibit yesterday, across from that low flat building (the sky was blue!). It was in an old warehouse, hence the photo of the floor which became, to me, an exhibit, an installation, in itself. I loved the floor. Nance loved the paintings and would happily live with one. (I prefer paintings that are chaotic and noisy. These were very quiet.) We both admired the director with his melodious voice, who with his wife, has actually made a business of selling regional work. That seems remarkable.