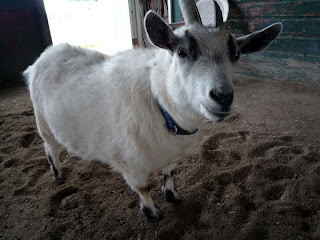 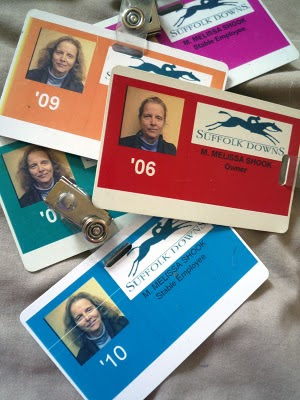 I hope I'm equal to the badge. I got it on Tuesday and soon, hopefully, I'll be able to help Monica with small tasks. Right now, all the walking to her barn and then to see friends I haven't talked to in months was slightly, a little more than slightly, more than I could manage without losing the next day to back and leg problems. But it was well worth it.
And there's a goat on the other side of her shedrow, quite friendly, very fat, more gorgeous than Goatie who often slept in different stalls in the barn that Pam Angevine, a trainer, was in four or five years ago. He would prance and butt. This nameless goat pranced a tiny bit, but seemed fairly amenable to my presence.
I'd like to have a goat and some chickens. As my grandmother said, "If wishes were horses, then beggars would ride. Actually, the badge, which allows me access to the backside of the local racetrack, is my prize possession....I guess dogs and a daughter aren't possessions, so you know what I mean. It allows me to eaves drop and converse. So, I got to talk with Monica who is my adopted daughter (though the paper work hasn't gone through and her mother would put up a big fuss), saw a lovely 10-week old Boxer puppy that Timmy Kirby, a taciturn trainer whose father had the Thoroughbred training business before him, had given his son for his 13th birthday, sweet square face, soft fawn fur.  And got to wave to Ronnie Prince, an exercise rider, and talk with Jim Greene, "Well, well, wait long enough and look what drags along..." (who with Shirley Edwards started the 8th Pole for health care and substance abuse problems on the backside) about the possibilities for slot machines which will improve the economic conditions at the track, something that folks have been waiting for, often hand-to-mouth, for the last six or seven years.
I feel embarrassed that I have amassed so much material about the goings on with the folks on the backside, interviews I was allowed to make, photographs I was given permission to take, permission slips that everyone signed. Hopefully the guilt about this will start to push me along. That would be a good project for the next year. Guilt has to be useful for something...
Right now I've just been trying to get some semblance of my life back. Chris moved my bed back into the tiny bedroom that has no heat in the winter, the couch back here in the workroom, a little of the clutter managed, the bathroom floor washed. Now comes the kitchen. And then the management of much, much more clutter. But I don't care all that much. I'd just like to be writing again. 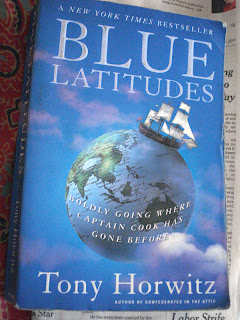 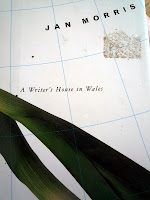 "Blue Latitudes" was so fascinating that I slowed down toward the end of it, surprised and disappointed when I got to the last page. I couldn't have imagined caring about Captain Cook or a youngish (forty-something) writer following the course of his expedition with a rather often drunken Australian friend (I would have imagined being turned off by massive, endless descriptions of drinking in Australia, and almost every where else Cook landed, since I think too much about the children of these drunks (if they have them), the damaged livers, the waste of money, but I found a streak of acceptance in my cold soul and enjoyed his fascinating writing, as detailed about the hazards Cook's men faced, as were the descriptions of  the folks he met along the way, his observations about the inevitable devastations that early European explorers brought to cultures they deemed inferior.
I liked the writing of Tony Horwitz so much that I bought several other books on Amazon. com, one cost a penny plus postage.
Though I'd tossed out all my Feynman books before in one move or another, I've just  bought replacements. This one doesn't add much except a longer story about his first wife which is admittedly very touching. I'm glad to have it, though reading it was like gobbling dark chocolate. 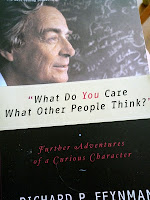 I'm trying not to be cranky that I'm not walking well yet...... crankiness is a waste of time. A friend, who read the blog, agreed that I really don't have the energy to teach that six week class this summer. I was grateful that he weighed in on what is a very hard decision. Giving up. Giving in. Not accepting the challenge. But if I'm truthful, he's right. I don't even have enough energy for my own work to matter very much. Even my frustration is dulled.
Posted by melissashook at 2:09 PM