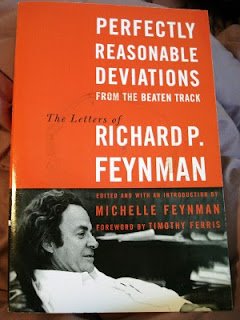 I have tried not to buy more books since I plan to move in the next few years and my task is unloading, not acquiring. But I found myself on Amazon, buying three of Feynman's books, second hand, partly because of this quote -
"One of the first interesting experiences I had in this project at Princeton was meeting great men. I had never met very many great men before. But there was an education committee that had to try to help us along, and help us ultimately decide which way we were going to separate the uranium. This committee had men like Compton and Tolman and Smyth and Urey and Rabe and Oppenheimer on it. I would sit in because I understood the theory of how our process of separating isotopes worked, and so they'd ask me questions and talk about it. In these discussions one man would make a point. Then Compton, for example, would explain a different point of view. He would say it should be this (italics) way, and he was perfectly right. Another guy would say, well, maybe, but there's this other possibility we have to consider against it. So everybody is disagreeing, all around the table. I am surprised and disturbed that Compton doesn't repeat and emphasize his point. Finally at the end, Tolman, who's the chairman, would say, "Well, having heard all the arguments, I guess it's true that Compton's argument is the best of all, and now we have to go ahead."
It was such a shock to me to see that a committee of men could present a whole lot of ideas, each one thinking of a new fact, while remembering what the other fella said, so that, at the end, the decision is made as to which idea as the best -- summing it all up without having to say it three times. These were very great men indeed.
Page 109, Richard P. Feynman, Adventures of a Curious Character, with Ralph Leighton.

(My appreciation puts aside all question of women not having been players in this particular setting, of nuclear warfare as well as of oil spills, environmental hazards, the state of our economy, greed on Wall Street, etc., and just concentrates on a meeting during which no one has to repeat himself to have been heard.)

and one more quote -- In physics the truth is rarely perfectly clear, and that is certainly universally the case in human affairs. What is not surrounded by uncertainty cannot be the truth." from the introduction to "Perfectly Reasonable Deviations from the Beaten Track," a beautiful collection of Feynman's letters edited by his daughter.
While I dislike the word truth, in this context, I really appreciate it. Oddly, the quote reminded me of my struggle for tenure during which a tenured friend from Woman's Studies carefully removed any hint of reasonable doubt from the text I had written about my teaching, scholarship and service. I knew she was right and that one is not allowed to express even an ordinary amount of self-deprecation or reflective musings in presenting oneself to any of the committees, but I just hated to submit to this cleaning up. However, I needed the job. 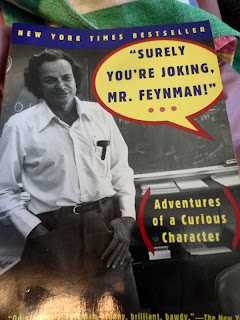 We had our first cookout which Krissy and Chris managed. My friend, Monica, a Thoroughbred trainer who has returned for this season at Suffolk, brought over Mariska who is just a year and a half and the most delicious little girl! And then the next day, Monica ran a horse in the 5th and we went out to see the race (she knew the horse wouldn't do well) and I finally got to see Clemente again. While I've always prided myself on understanding folks whose native language isn't English, Krissy is far better at understanding his fantastic stories, I'm sad to say. He's the most charming fellow....and, as usual, snuck up behind me, grabbed my neck and I screamed. He gets a great kick out of this. 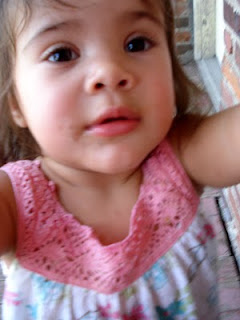 I figured out how to deal with physical therapy. I just lie and tell her whatever she wants to hear. But I am better and if it weren't for having done too many of the prescribed exercises I'd be back where I was four or five weeks ago, walking a bit faster.  But what the hell....   One more dose of prednisone tomorrow and we'll see how the body does on its own. And when I get up to speed. I'm dreaming again, after a long reprieve that must have been due to the illness so all night I try to find a job, try to get back to teaching or accepted somewhere else and wake up worrying, slightly depressed... But we live in hope......... 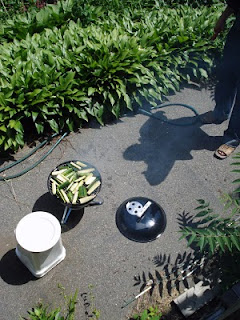 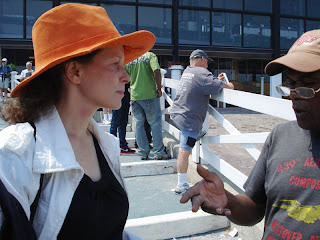 Posted by melissashook at 6:02 AM