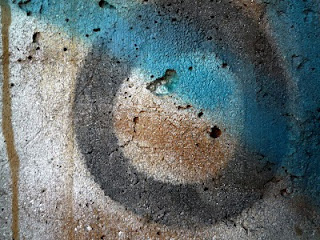 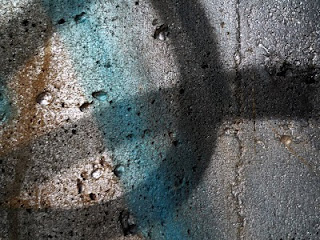 This is the second time I've written a long, long, irreplaceable entry on Tuesday Poem instead of in my blog. Here is the attempt at replacement....

Perhaps he had phoned or just turned up at the door, a black artist, a musician, who wanted to talk except that I hardly knew any of the jazz groups he was talking about and couldn't remember the names of those I knew (except Archie Shepp, lithe and summery, darker than the dream fellow, New York, all those years ago, but I didn't mention him) and so he got bored of talking to an audience who didn't understand his references and besides he really wanted to go to bed with me, but I had no interest in that so I followed him, a long walk in the city, that led to his place, a house where he must have been squatting, no electricity, but an upholstered chair in the living room, windows all around, and his friend who seemed crazy, a young, large white man, and then lots of other guys, who were drugged or crazy and all white, like everyone was using the place as a crash pad so I asked to leave and as we went up the driveway, a man, white, was walking two black dogs, rather large, like English setters, but the wrong color and we knew something was wrong with him, a dangerous look in his perhaps blue eyes, so I went ahead and took shelter up stairs and on a front porch with three older men, perhaps even old, who had to be homeless, all that flesh and baggy clothes, not any interest in protecting me, but I hid between them until a small, brown dog that had been unleashed rushed at me and I grabbed the scruff of his neck and he dangled and snarled and at one point got his teeth into my wrist, but he unlatched and I held him away from me and then, somehow, I was in a room and a woman was walking in the door, looking for the dog her friend, an old lady, had lost, a dog that looked just like the dog I was holding, almost in her face, so I had to quickly make up a name for it, pretending I'd had him/it a long time, my dog, and then I was outside and holding another dog, too, also small and snarling and lighter brown, also by the nap of the neck, wondering if and where I could throw them so that I could get away and then throwing the newer menace onto very lush green grass in a park, sure that he'd come back to attack me, but instead he ran after a small, fluffy, beige dog dragging the leash, and now I had only the first dog to toss away, in a strange area that seemed almost like gray lava, hillocky and dippy with what I hoped was a muddy pond that would mire him down so I could run away as fast as I could which I did as soon as I hurled him, but I am slow, I told the musician who was much faster at escaping, I am too slow and worried that I'm not fast enough since the stone is pitted and difficult to climb, but I do and find stairs leading up to what might be a church with a side door that opens from the top down so that it lies flat at my feet, revealing two other doors that are open so I enter this huge room, high ceilings that I'm sure belongs to a monk who writes at the somber, wide table with a quill pen on it and a set of folded papers that have, I think, drawings on them which I look at briefly as I try to find paper so that I can leave a note, briefly considering whether I should write a prayer, but I don't believe so that's impossible, besides there's no scrap paper only a bed which appears like a gray wool low rectangular tent that I peer into and find a matte, double bed size, half of which is a dog bed, but now lights go on in the other room and I walk to the door and peer in while the artist, musician, crouches by the door behind me, and see three women who must have come back from shopping because they are putting bags on the wood counter in this crowded kitchen. Two are older with gray and yellow and white hair and the other is taller and a bit younger, also with white and yellow hair, short and wispy as was theirs, and I ask for help and they explain that they are artists, but I'm not sure what type because only the younger, taller one says that she is a sculptor because she is so pathetic. I follow them back into the large, dark wood paneled room and watch as one spills miniature replicas of food on a round table and suggests that they have a pretend tea party but I tell them that I've just seen an exhibit or a store front display of curious replicas of everyday homey objects and am trying to tell them about how they might make them -- clay -- when the younger, tall woman repeats that she is a sculptor and is pathetic and the others tsk, tsk, her for a self deprecating remark, as they had done when she said this before, and the alarm clock rings because it is 5:30 and I'm supposed to take Tulip to the groomer by 7.

I am relieved to be away, but exhausted.
It's only after I've written this dream in the Tuesday Poem that I am curious about what would have happened and certain that it explains how I've been feeling for the last three weeks -- speeded up, worried, whirling.

Except that all that work was wasted
and Tulip's groomer had called in sick so she has an appointment tomorrow, but it's for 10 o'clock.
Posted by melissashook at 4:57 AM