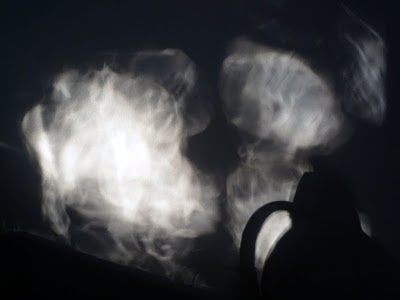 I must be well because yesterday I found myself in the car, my mind speeding, on the way to deliver tomatoes from the garden to a friend in Paneras and then on to the Computer Loft in Allston, hoping that my problem of why the Epson archival printer wasn't working would be solved. What had happened in all this endless attempt to end up close to the same point I'd been when the G-4 crapped out after 10 years of valient service. I was manic, too speedy by half, with a feeling I haven't had in ages -- being wired for sound. I almost turned around because the speed of thought and worry seemed dangerous.

But I got to the Computer Loft, saw Alex (who was putting on his backpack to leave the shop, oh, and alas) who had been on vacation in the Bahamas for the Labor Day week...I had to sit and wait, hoping that he'd find time for me, and, not to waste time and to finish something I hadn't had time to do, I took out the two sheets of e-mails that M. had sent me earlier in the week.

The best, very best, most perfect, were two quotes from Beckett --

2. Moran has been told that his boss, one Youdi, has
remarked that life is a thing of beauty and joy
forever. Moran puzzled, tentatively asks his infor-
mant, "Do you think he meant human life?"

I can't tell you how much reading these helped. I'm not an out-loud smiler, but I smiled. Comforted.

Alex did find time for me, checked to see whether the driver had been loaded. It had. Probably the problem was something I'd done. I could, he said, if I had trouble, contact them by web and they would take over my computer and see what was happening. "You can even watch while they move around inside it." How is this possible?

It was. My printer didn't work. I contacted Service via the web, some pleasant fellow moved around inside my computer and put the name of the Epson someplace (it had already appeared to be there, but it wasn't) and the damn thing works now and I can get ahead with printing a show for the Chelsea City Cafe about the Chelsea Community Garden. An I-took-it-on-crazily-and-expensively-and-voluntarily-fool-that-I-always-am-project.

When I lived with L. I taped drawing paper to a wall of his grand front stairway and traced the shadows of the leaves as they moved across it. I made countless drawings like that and truly learned that the earth does revolve around the sun. I'd intended them as a wall for an installation of one of the clay pieces that's now stored in the attic in the endless boxes.
Posted by melissashook at 7:33 AM