On Tuesday a student brought in some remarkable/beautiful/surprising new images....double exposures, black and white, printed well on good digital paper, square photos with a narrow black matte. I certainly expected that his work would be good, but these were gorgeous, haunting, mysterious. He'd had a hard time getting going and here it is, past the mid-semester point, and here are all these photographs. 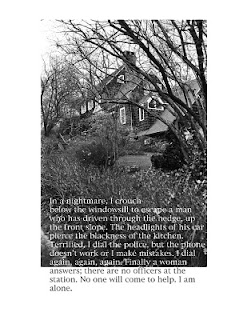 It as only after I asked other students to come over and look at them, and they began asking questions that I put the technique together or rather it was handed to me on a plate. He'd said they were taken with his I-phone, only I hadn't noted the I part. And I knew that they were double exposures. But I had absolutely no idea what was giving them such a mysterious quality until someone asked whether there was an app for the technique -- there is. Two photographs are melded together, so after taking the first, he carefully considers the second, takes it, clicks something and the images overlap. Obviously there's a lot of thought put into the taking of them.

What was a complete surprise, though, is that there is another app for the mysterious quality.....and it's called a pinhole app. This doesn't negate the beauty and significance and sureness of his images, but it really puts a point on what used to be done with an oatmeal box, a pinhole and a piece of photographic paper that acted as a negative.
Posted by melissashook at 9:53 AM