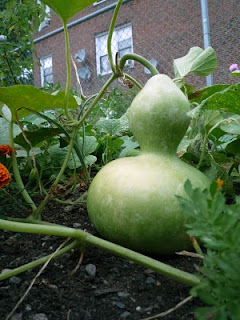 This is the photograph that Madelaine and Muna thought most expresses the idea of a community garden. I hadn't thought about that, because I don't tend to recognize metaphor (what a dope I am), but they are right. The brick and fencing are symbolic of the garden, and also all the tiny, chain-link fenced yards around so many of the small houses. I narrowly escaped having one by choosing wood -- not a good choice since the slats get broken and once graffiti was sprayed on it.
I do like this bottle gourd, one of many that Evelyn grew. I was surprised about the richness provided by these few vines and the one with gourds shaped like bottles that grew on the fence. 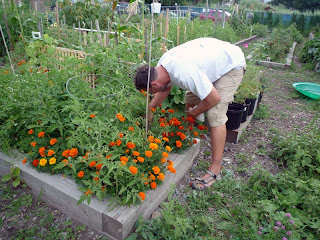 I think Madelaine understood that I think these photographs are serviceable, that I'm glad I printed them all and that they've been shown at the Chelsea City Cafe, that the opening and fuss around them brought more applications from prospective gardeners, but that I don't particularly care much about them. They aren't my work, not anything I take with the deadly, unapproving seriousness with which I regard 'my' work. We stood talking at the non-opening (the real one was a month ago) last Saturday.

The images do record a season at the garden and were a fine vehicle for connecting me to an interesting group of people. And I'll do it again next year, because I can do it more easily than most people could. Part of my skill set. And I'll add work at the Senior Center. And make more videos. This has gotten me back into the community work that I wanted to do when I moved to Chelsea in 1985. The long project that I did then, interviews and photographs of a representative, I thought, group of residents in this very small, very poor city (7 and 1/2 people per dwelling, highest rate of occupancy in the Commonwealth), wasn't really shown because there was no place to show it and I regretted that. Just as I'm glad that this one had some real use. It seems odd, difficult, that I'm now 71, just starting to do the community work that I had wanted to do thirty years ago...and there is so  much potential for recording things I'm curious about now -- why folks landed in Chelsea.

It doesn't mean that I didn't work hard to print and frame (however cheaply) this work. That's natural. But I have no desire to add them to my endless store of stuff........... 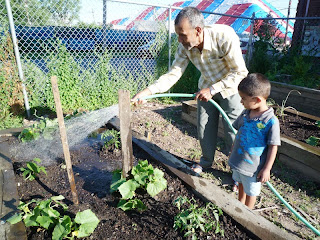 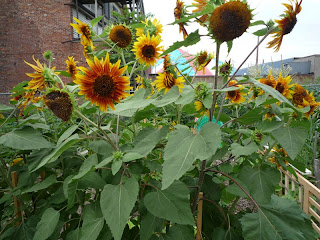 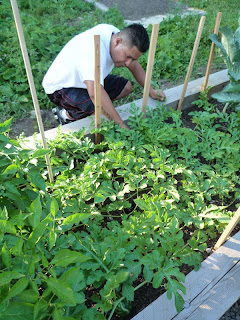 When I moved here, there was no where to show photographs. Not at the library, not in City Hall. Most of the set I took, sometime in the mid-eighties, ended up at an outreach of Bunker Hill Community College and I forgot about them. Years later when I phoned, hoping to retrieve them (they were decent silver prints, nicely framed), I was told they were no where to be found.

Now there are two galleries in Chelsea, though the hours that they are open are limited. And there is a gallery at the Chelsea City Cafe, just a few blocks away from where I live. Josh puts up shows every month or so. Chuck runs the eatery. And we had a remarkable opening there. Lots of gardeners, friends of gardeners and children. It was the best opening that I could have imagined and I hardly had to talk to anyone. Margaret, a woman who lives just blocks away, who I should have met twenty years ago so I could ride on her coat tails and get connected, who did a lot of the detail work for the show and publicity, was a grand hostess, making introductions and spreading graciousness. 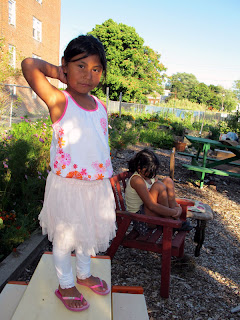 My favorite photograph, I have to admit, one of the four or five that I actually like, is of Nesa who will be the garden overseer next season. She's from Bosnia. And she came from a farm, growing all the family food. No one works harder than she does, even though the doctors don't want her to be on her feet for more than four hours a day. "Next year," she'd say. She says that for everything. And she laughs. She's had a lot of tragedy in her life. And suffers from it. And she tries to joke and laugh as much as possible. Sometimes she yells back at Joe, who has been the overseer this year. They both shout at each other, laugh, and smoke like demons. 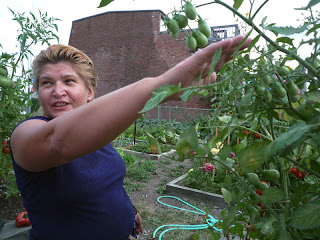 Posted by melissashook at 5:46 AM