This particular photograph is out of focus and I thought about just bagging it, but actually it's so sweet and earnest. Elsa is an enthusiastic person, generous and curious, so this really does look like the way she is. I'm interested, also, though more reserved, so this is a rare image that actually shows that I'm quite friendly, when you get to know me, and quite content. 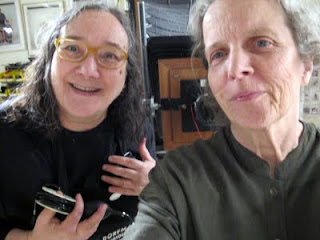 I always remember Elsa's birthday at the end of April, probably because mine is a bit sooner in the month. I spent mine in the community garden, taking photographs and planting onions and barely survived it. Actually I thought my daughter would forget it, but I've become so emotionally deadened, that it wouldn't have bothered me, not like the way it bothered me when my father forgot it, but that was because he was getting so old and losing track of details he'd never lost track of. If Krissy had forgotten it, I don't think I would have minded, but she didn't. 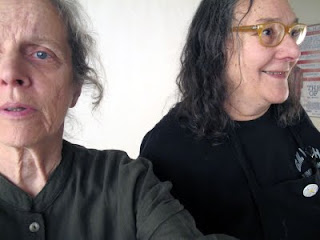 So, when I got an e-mail from Elsa asking whether my birthday had already happened, I said we should have lunch and she said yes and we had lunch on HER (this really deserves capitalizing) birthday! What could have been better. I got to redo my birthday and we had sushi (she says I take the best food pictures, but they are on another camera so you will not get to see how she art directed the photographs of our respective and gorgeous plates of vegetarian sushi) and she took a Polaroid 20x24 of us in her studio.

She is the goddess of this huge camera, and instrumental in lobbying for the continued production of the film and chemicals. And she loves this monsterously large machine which is so expensive to use. But actually fits her very well. I'd prefer to travel with a camera, but she has made a home for the Polaroid, a studio with lots of photographs on the wall and postcards, strobe lights and background paper, and the essence of Elsa's ability to make anyone comfortable with her questions and conversations as she potters. 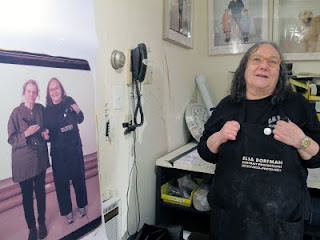 After I was back in the studio,  I remembered that some years ago I took a lot of video footage when Elsa took photographs of us and included Krissy and Bogie....that was one of those many things I do which I love doing and then forget about even though they are actually very precious. What could be more interesting than having taped the whole process as Elsa measures where we're standing, disappears behind the camera, stands with us, talking all the time about something or other. 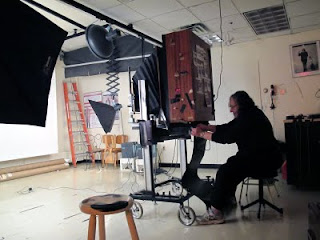 I love listening to her. She would be an excellent person to accompany someone to a doctor visit, though I don't know if she likes doing this. But she's so pragmatic and matter-of-fact and would say, "Well, that's not good news. But let's look it up and see other ways of handling it (acupuncture and herbs in addition to traditional medicine). And you've had a good life and should get a few more years of it, so make the best of it."

I am very good at going to the doctor with people and always glad to do it. I'm quite non-reactive and useful under those circumstances, but I don't do the afterwards research that she does...and probably am not as comforting because I look so damn forlorn. I was actually extremely happy to be with Elsa, not the least bit worried or fretful, but I look miserable. When she's thinking, her face closes up, but she doesn't look as if it's the end of the world.

Elsa's a grandmother! How can that have happened? I asked her a question like...how could we have gotten so old... and she said, "Well, we weren't hit by a car when we were crossing the street and didn't die of some disease or get in an accident," and I said, "No, I meant how did so much time go by," and she said, "Oh, that's a different question." But how did so much time go by? How is Isaac married and a parent and living in San Francisco? How did Elsa and I get to our ages? The memories are so vivid and seem so recent that it's absolutely peculiar. But that is a different question. 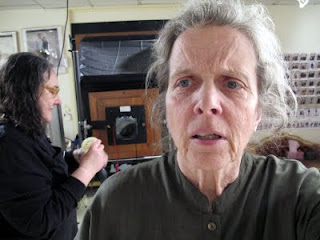 I love Elsa and always feel so much better when I see her. That's a fact. But why haven't I seen her for well over a year? It's that sort of slippage, the not paying attention to those who matter and what's interesting, not making the effort to call, or e-mail, to get together. Every time I see her, I swear that I'll lobby to see her once a month. And then don't. What I liked about those olden days, in New York, when I was scrabbling around, were the long afternoons of just hanging around with a friend, talking. Then I moved up here and met successful people and learned that having a friendship means having lunch every now and then. But now that I'm retired, I could make it mean more than that. Or happen more often. That's one of the benefit, if I'll only take advantage of it.
Posted by melissashook at 3:54 PM