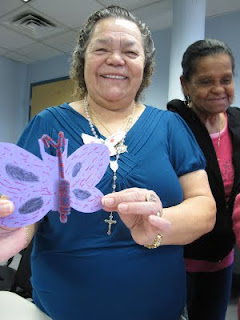 All last night, I was lost. Somehow my ex and I were in separate hotel rooms, but when he left, I didn't know where my room was, there was one of those elevators that go round and round, shaking, stopping at half floors, in a castle that's a hotel, where is floor 5 and 1/2, and where is the room, and why are papers torn all over the floor, and my daughter's toys broken, and all that jewelry, and why can't I get to my parents' house in Nova Scotia and, oh, isn't this a fascinating idea, a plastic box with sand and jewelry, just shake it and a new image is revealed, quite beautiful. It was casually put together (held by tape) by a young college girl at the Rosenberg's house, where are Marv and Lilliann? And more, much more of these dreams. It was awful to be asleep.

I wake up exhausted. But I was exhausted yesterday, only revived briefly by the Zumba class.

Last Friday and Saturday, I put together two videos -- one from the community garden and the other of the Fiesta de las Mariposas. Though I know how to edit with Final Cut Express, I don't know how to edit with it and am not entirely sure what I'm doing. So it takes longer. But it takes a long time, anyway. And my body hates sitting. But I couldn't get up. I even lost track of time and was almost late to lunch with a friend, that was followed by tea with another friend.

Graciously, Margaret checks the Mariposa Fiesta video and informs me that the title is incorrect in Spanish and she changes it to Fiesta de las Mariposas. This time I didn't give her editing credit because that was my only mistake. Last time, she got the editor title for Carmen demonstrating how to make butterflies with wire and netting. There was a tiny bit in there about something or other, me and the camera, etc.... Margaret is the important ingredient in these videos with Spanish speakers, but she was also important on Sunday afternoon because the one about the first two days of work in the garden made her happy -- all those folks working, able to see themselves on Chelsea Cable TV, all those kids playing and shoveling.

(One sterling quality about Margaret is that she laughs out loud when she's happy. I almost never laugh out loud. And besides, without Margaret, I wouldn't have gotten in the Senior Citizen Center, video taped the quilting ladies, etc, etc...........)

Now my problem is printing titles on the 7 copies that I made of the Mariposa Fiesta. I'm determined that what I'm now doing about events in Chelsea, (additionally trying to get as much of the oral history as I can) will go into an archive. When I moved here in 1985 and did a photo project with oral histories, there was no place to show the framed photos except at a local branch of a state school. So they've all been dispersed. Fortunately, I found out that the local library does have an archive. Though it's an attractive building, it has no charm for me since you can't walk into the stacks. But at least it has a room where boxes of old photos are store. 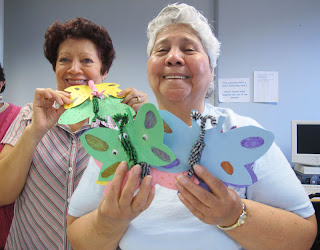 The next video that will need Margaret is of the women actually making the butterflies, most of them with recycled paper and glitter that was actually made in America, it's that old. I was very grateful that the women allowed me to tape them. I even taped hanging the butterflies in the large all-purpose room, but my daughter somehow taped over the first half, so all those hard-working ladies have vanished, leaving Carlos on the ladder, hanging butterflies from the ceiling.

What I love about it all is that sometimes the women start singing when they are making butterflies, and some of them dance when they are handing the butterflies to Carlos who dances a little while he's hanging them. Two women even sang unaccompanied solos at the Fiesta. (Spanish and English)

When I was in Tucson, and listening to Nance giving English lessons on the phone or through skipe, I heard lots of laughing. She's another person who laughs a lot. I though about giving similar lessons, but I'm not a good phone person. If a person was actually around me, she or he could at least tell that I'm reasonably friendly in a calm way. But I'm not very conversational and I don't have that wonderful ability to laugh.

Lucky Nance. Lucky Margaret. Lucky Krissy.
Lucky me for different reasons.
Posted by melissashook at 5:05 AM