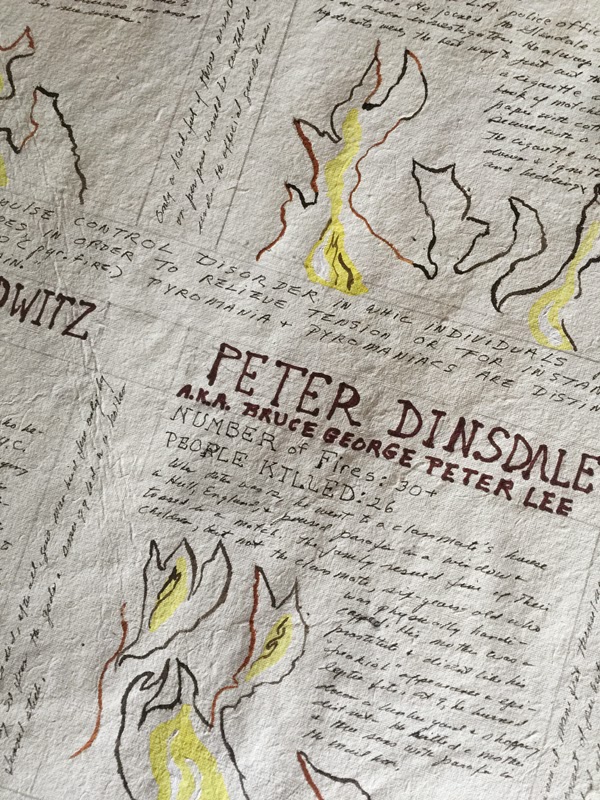 The lights went out at six on New Year's Eve and I got in bed with the New Yorker and a flash light. They came on at nine and I thought, "Now, I'm in business," but they went off again. I vaguely thought about whether the heat would go on again, but there was nothing I could do, so I went to sleep.  I do think about death, as much as I always have. And clearly it's closer since I'm 75. But I feel as if I'm just starting…….how can that be? All this energy and clarity. Quite amazing. I hope for ten more years and health.

And I also hope that my beloved dog, hardly hearing and not seeing much, barking sharply when he's lost me, stuck in the kitchen alone, makes it to 15. The evenings are a great trial because he wants special treats, bits of food, something delicious six, eight, ten times adding little tidbits to persuade him to eat his food.

The young men working on the windows had lunch outside near the fence and dropped a tiny piece of bread, maybe the tiniest bit of chicken and Bogie found it. And hopes that someone has dropped more. He hunts in the leaves, hoping.

But all the work those fellows did seems to have worked. The wind doesn't blow the curtains inside or rattle the windows. I don't have to put up plastic! What a big change.

I joined a small gallery that's a throw back from the sixties…all that freedom and lack of fussing.  Nothing organized. I don't even get the emails since there's some disconnect somewhere. But who cares...The first group show is about Pyromania and the drawing above is one of my two pieces. It's rather formal and I imagine that most everyone else has produced wilder work….. But we'll see at the meeting on Tuesday night. I wish I'd joined years ago because it gives  me a chance to expand beyond photographs. And it's truly wacky-packers…. just what I like.

When Mim made tea and offered these gingerbread fellows, I honestly had a hard time eating them. My father used to buy packages of sugar coated almonds, bundled in pink or blue blankets with little baby faces. I couldn't eat them either, but he happily bit the heads off. It's incredibly silly not to have wanted to eat a cookie from this plate, but I'd been drawing one of the man that she gave to us at the Bagel Bards, nicely each in a sandwich bag. I brought mine home and Sherlock knocked it off the kitchen table. I followed Bogie's obviously delighted self as he high-tailed it to his bed, the bag in is mouth, intending to eat it and then the cookie. He managed to knock the arm off before I rescued it and I've been drawing it. That made my attachment to Mim's 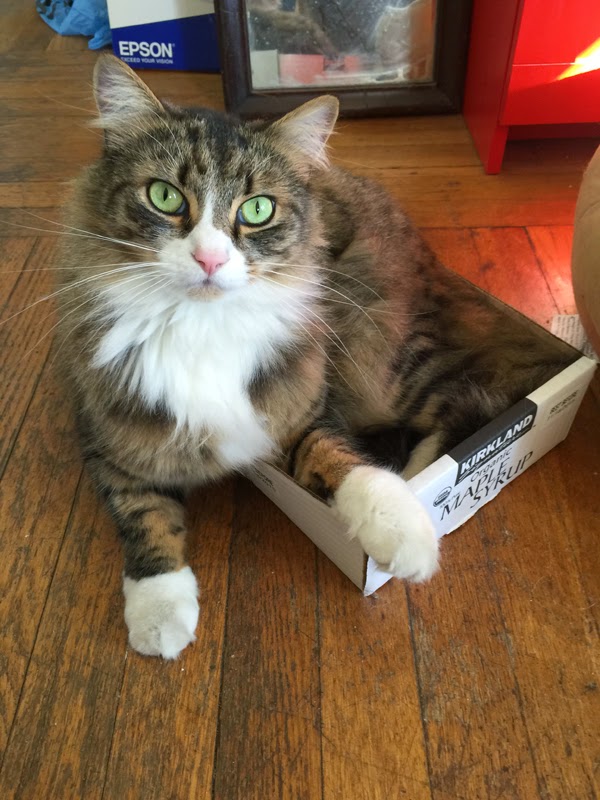 Sherlock got two new boxes from Costco for the holidays. He still has his slightly larger regular box, but seems to prefer the new smaller ones. 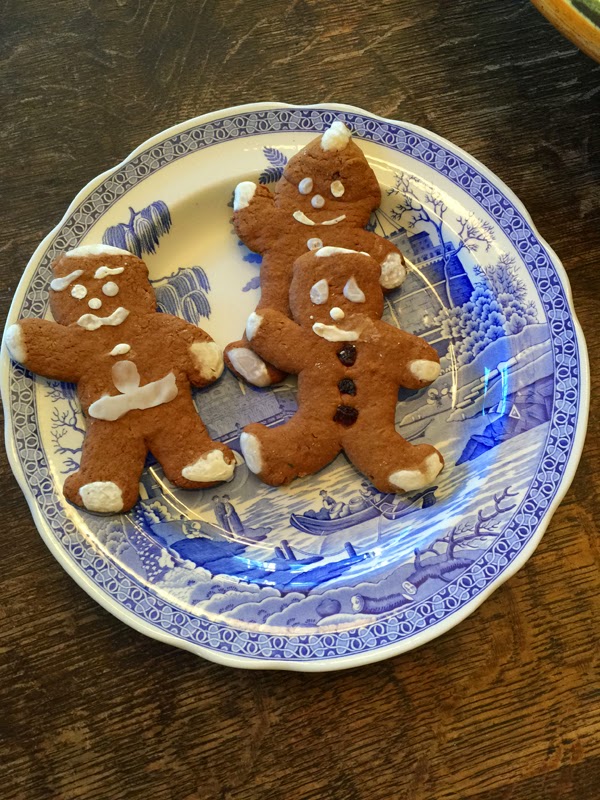 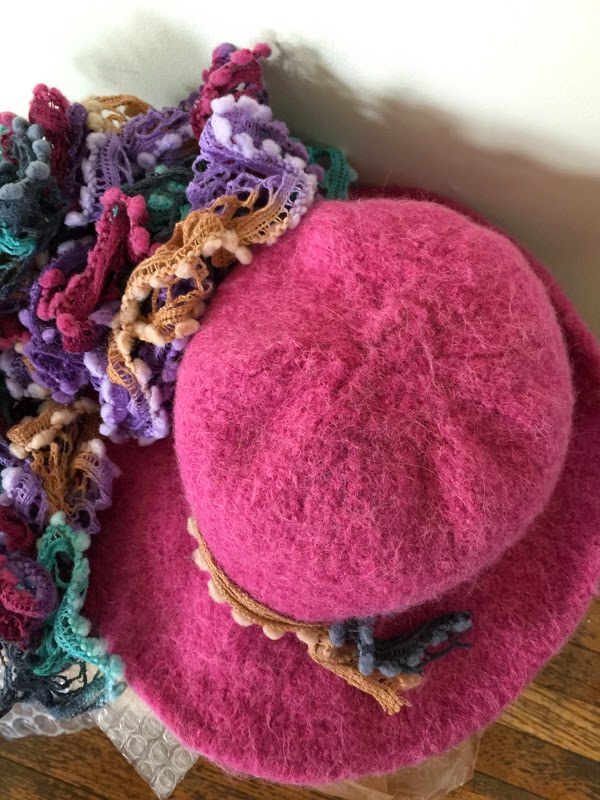 Lee felted this hat and it happens to look reasonable on me. I'm not a hat person, but….  It looks fine. I can't wait to wear that glorious scarf. She knits while sitting in front of the TV because she'd incapable of just sitting. You will find videos of  the Irish Wolf Hound puppies that she whelped about eight months ago… on www.pennyanteproductions.com     And you'll see the house she lives in, the stallion and an old mini-horse named Napoleon. 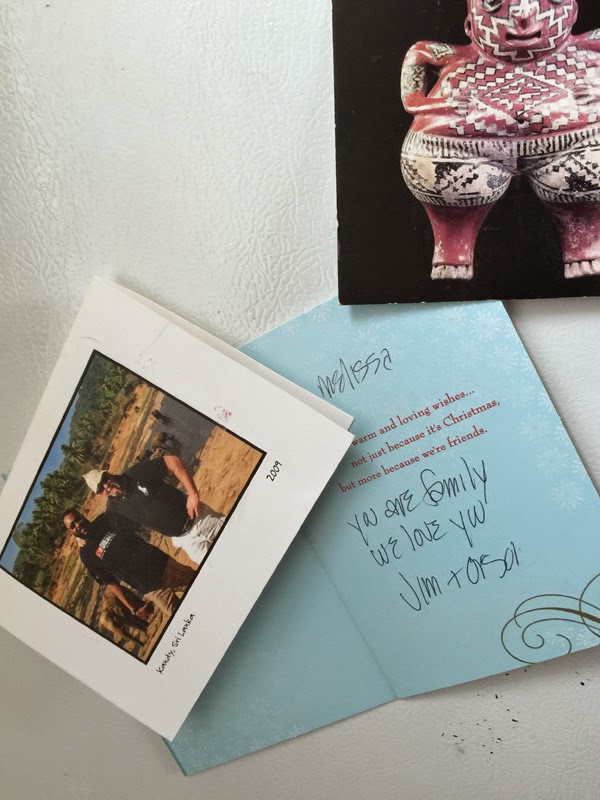 We've stopped giving presents, thank goodness, but when Jim gave me this card from he and Orson, I opened it and said, "Oh, no, it's not a photograph of you both on vacation!" I never learn to keep my big mouth shut. He's had an exhausting year, they didn't have time to print a vacation photograph, it was a lovely card…and I have it, alone with an image from a past vacation next to it.     (They are so gorgeous, improbable, huge and overpowering men….and they take elaborate vacations. Orson particularly loves Cairo. And Jim does, also...

I've gotten by/through the season, from Thanksgiving until this last week-end of the holidays, by watching Hercule Poirot on Netflix in the mornings. I don't like Agatha Christie, but I thoroughly enjoy a pleasant murder and it's been very comforting. And I'm trying to learn from him to make a vague statement rather than blurting out what I really think.  But I've only started taking these lessons, so they haven't had a serious effect yet.

I'm seventy-five and haven't learned to shut my big mouth yet, but there's always hope.

I had a nice talk with a friend who now lives outside of San Francisco, laughing about the bottle of rum from which we added to the store-bought egg nog…she remembered that we talked about being old ladies, still drinking egg nog and nipping at the rum. That wonderful loft she had on Eldridge Street, the kids running in all that space… That was a 'real' loft with all the advantages and disadvantages. I used Kahula (sp?) with yogurt ice cream a few nights…in spite of my determination to drop five pounds… An instant buxx.

Tomorrow's a repeat mammogram. And then in February I'll have a laser treatment for my eyes so they will be back to the glorious clarity that I had after the cataract surgery. The eye doctor confirmed my sense that I don't see nearly as well, explaining that 20-25% of people have this problem…the clear film that fills the space in the back of the new lens sometimes becomes like wrinkled wax paper, making it hard to see as well. But as easy problem to solve. 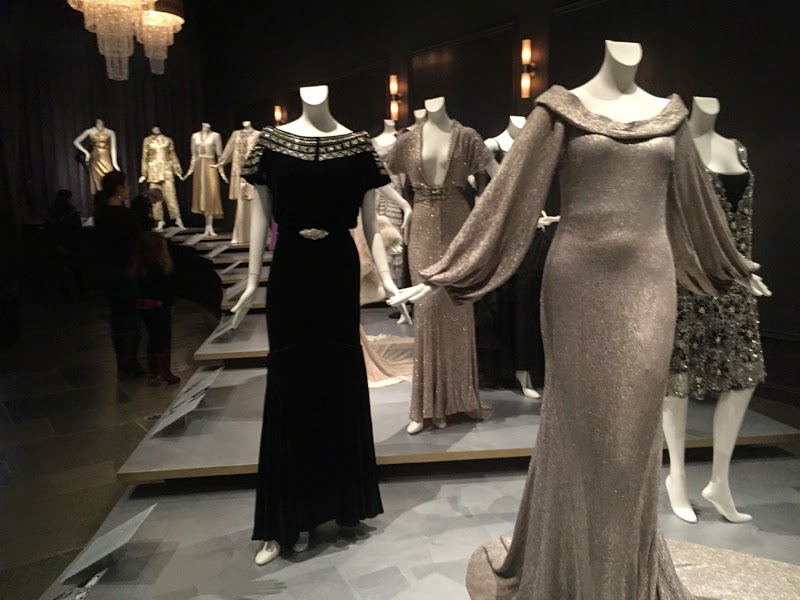 This is a nicely designed show at the MFA… those unimaginably elegant dresses from movies…in the 30's and 40's. I used to wear a white satin dress that had been my cousin Patsy's and let my best friend, Cinnie, wear the purple one which might have had white grapes. Hard to imagine that Patsy had gowns and I played dress-up..and that I kept the best dress for myself. 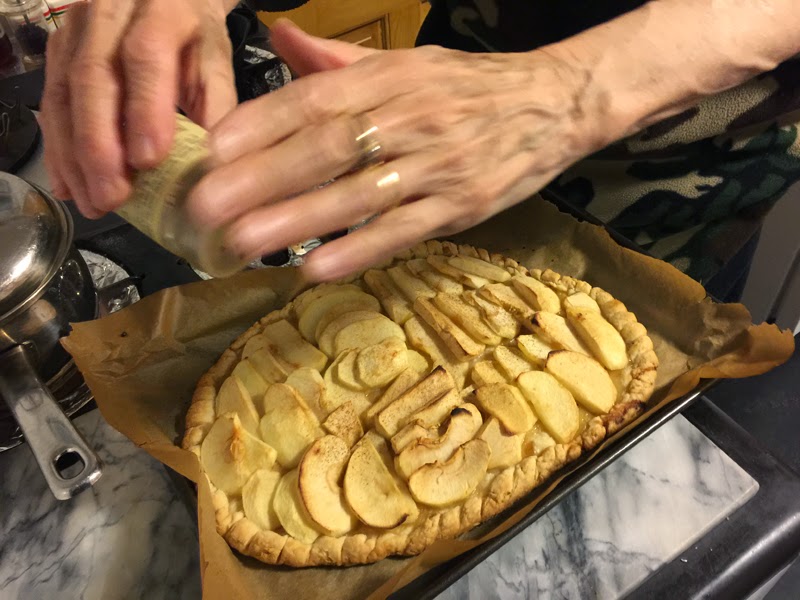 And Mim making an apple tart…very beautiful.
Posted by melissashook at 5:21 PM