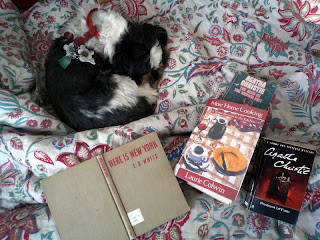 I realize that my recent blogs have been a bit heavy duty, as if I'm berating myself for who I was. But it's been leading somewhere. Part is the curiosity of what might have happened if I had become an art major, an offer to become one surely suggested by Harvey Fite since his were the only studio classes I took at Bard.
I loved being in that studio, windows on two sides, one of which was just at leg level so I could watch people walking by on their way to the other studios in the Quonset huts below. I can't recall what Harvey Fite looked like, only his assurance that a master Italian craftsman could throw plaster so carefully that not a splot would escape and all the shims would be carefully, perfectly covered. I liked working there, alone, the way the light came in, the way the clay felt and smelled.
And what would have happened had I been able to listen to Donald Finkel and think about plot and motive? What if I'd learned about the arc of a story?  We did talk, most interestingly, about how the costume of non-conformity, maybe a cloak, an outlandish outfit, long hair and a beard, functioned as a disguise, making most people turn away and not look under the surface, not even notice the face. This was before the Hippies, after the Beats, and we each understood what we were talking about -- invisibility.
But thinking about the choices I might have made, had I been capable, is  not what I was working toward in these last blogs. They lead to my picking up a project that I started in 1994, something I worked like the devil on, scrabbling over those words, thinking as hard as I could about the amorphousness I was trying to describe. I'd worked hard, given up, and forgotten about all that work. But somehow, this blogging allowed -- what? Some vague searching around, some collecting of thoughts, that moved me forward.
I don't really understand why this blogging business has become so interesting. How I can float words out into space, not really caring if anyone reads them, but also caring? Not worrying if I've said the wrong thing, but then worrying a bit? It's useful, meditative to write. And I write more easily than I talk, so it's a pleasure. Fun.
And it's extremely interesting to read other blogs. Taking that twenty minutes in the morning to check around and see who is doing what on the blogs that I follow. Trying to think of something to say that isn't stupid, but more just seeing what's up, what's been posted, what photo or drawing or thought. Curious. A vague community. An illusion. Something to give importance to in the pattern of the day, but not too much.
What my last couple of posts have done is push me back into writing I'd forgotten about. I was waiting until my poetry mentor, a good, overworked friend, possibly has time to read what I wrote about the track this summer. Something he won't get to until after Christmas. So, I stopped working on anything. Read mysteries (something I do when I'm depressed,) Laurie Colwin on cooking, a book on New York by E.B. White which takes about half an hour to devour and is beautifully thought-out. I found out about the books from Maureen Corrigan on NPR, some Christmas list she'd compiled of bests.
My new crime has been ordering poetry books from Amazon, but my saving grace has been ordering non-fiction books from the library. 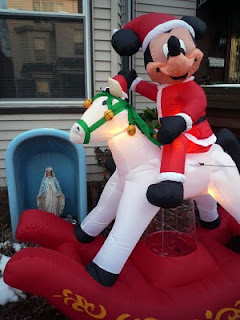 Somehow I've been able to almost ignore Christmas. I have no sense of impending doom, the way I usually do. Krissy bought a tree, set it in a bucket because we threw away the stand when I last moved, covered it with white lights. The snow is dreadful since I'm so afraid of falling that I let her and Smith do all the dog walking. 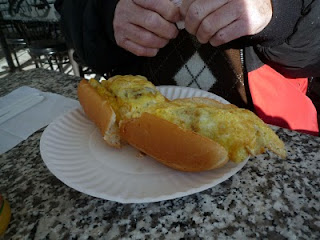 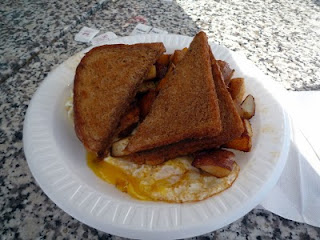 Today I drove Joe to a restaurant he likes across from the water at Revere Beach. He told me to tell his son that this is where he wants his ashes scattered since he spent so much time here, just looking, relaxing. Years ago he used to live upstairs when a woman had a rooming house and rented out three or four units. He stayed in all of them at one point or another. But she's died and now Santorini's restaurant is there, in what was once a house. He and his friend often go there in the summer. His friend's in a wheelchair, diabetes. "Once they cut a little piece off you, they keep cutting. Bad." The dog comes along and sits in a chair while they eat.
Joe ate an egg sandwich. I had two eggs over and whole wheat toast that had a phenomenal amount of butter on them. But they tasted like ambrosia. Until afterwards. We talked about horses, and a little about Philippe, how Joe would never walk behind a horse, how he kept his left hand on the haunch if he was near the back, how a horse can rear unexpectedly, how Philippe was going to take that one out to exercise, he'd just been given a leg up onto it, the horse reared, fell over backward, on Philippe, crushed him. They'd known each other for years.
Joe wanted something at Walmart, so we went there and he picked out a small battery operated car for a four-year-old who will be at his friends' Christmas dinner. He never had many toys himself and it really mattered to him to get this gift for the boy.
Posted by melissashook at 4:32 PM