The Cycle of the Year 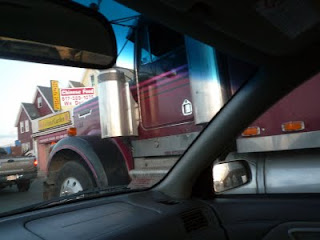 The cycle of the year is almost done. There is one problem to solve and that is Tulip and her hair. Not the type of dog with fur, she needs a grooming and that means I have to take her to a vet and get a sedative. The last problem for this year. I've already done the car inspection -- December.
The others have been accomplished including one that's not on the cycle -- getting new glasses.
Now I can wait until when? March? April? for the yearly check-up. And then comes the urologist for the tiny bit of blood that appeared in my urine three years ago. And then there is the mammogram. And then the gynecologist. My appointment with her has gotten later and later, well into the summer.
I can't wait so long for a grooming for Bogie as I did this time. He lost most of his moustache and whiskers. And he now looks like he did as a puppy, except he isn't.
The good news is that when I was walking them one dark night this week, a fellow, much older than the young guys who usually did it, was putting up the creche in the apartment house two doors down. I told him how happy I was to see it going up and he said something, something, my country and I knew that someone had died and he'd gone home last winter. And I asked what his country is and he said, Hondouras. What I had missed was the excitement of installing this site that extends to both side of the building and used to involved a number of young men, lots of women watching from the porch, some holding babies, and kids jumping around. And music! I missed all the lights hung on the fence, the two deer with moving heads and the two trees. Krissy said that one of the big families moved out a month or so ago, so that must be why he had only two teenagers out with him. I'll miss all those children playing in front in the summer, the women sitting on the steps. Most of the young men disappeared a couple of years ago.
In the summer, I look at the asphalt front yard (many front yards around here are asphalt. One that's a couple of blocks away is a green plastic rug cut to size. A few doors down from that is the total paving with nice looking blocks. Occasionally a weed escapes through the cracks.) But anyway, the asphalt in the apartment house (as opposed to the two and three-story houses) is marked with white paint, x's where the tree will stand, where the deer will be placed. There is a small rectangular area on the right of the steps that is earth with bricks around it. That's where two small azaleas grow, with spring flowers that are the color of dried blood.
On the backside of the racetrack, guys would say "my country" and it would mean Guatemala or Santa Domingo, etc.  There were a lot of Puerto Ricans which didn't involve any "my country" and Joe who's arrived here from Cuba, a fifteen year old,  on a plane to Tampa in 1951 to work with his father on the track. There was no "my country" there. 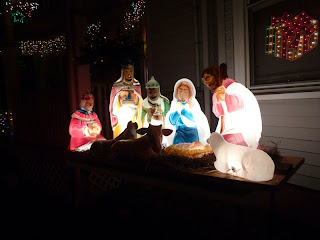 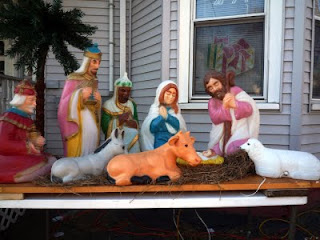 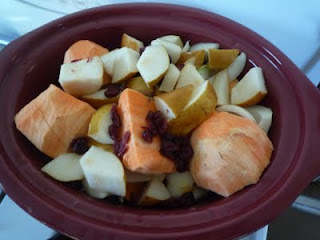 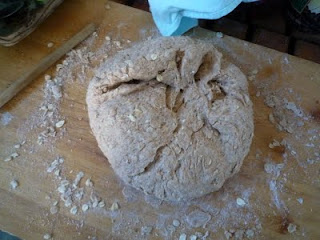 I am in my winter mode which means eating orange, cooked in the crockpot. But because of Susan and Mim and maybe because of the Radish King who baked a cake when I annoyed her with my repeated complaint about finding her site, I am making bread. I haven't done that in years.
Susan and Mim both love food and that doesn't just mean eating out. They talked about it at the Bagel Bards one morning and I could hear the love in their voices.
I love food when someone else cooks it, but have not learned to treat myself well in that department. But I am reading essays by Laurie Colwin, writings from the kitchen, and they are quite pleasant and she laughs about failure...
My problem is still night. It's always my problem in winter when it's dark, it's cold, it's dark, it's dark, it's cold and I'd rather get into bed with my clothes on and pretend that I'm going to read. I know I'm wasting time, losing all those hours and that, because I'm dodging the night walk, I'll have to get up at midnight or worse to take Bogie downstairs when he's awakened and barked once. I'm a person who thinks so often about death, and what I want/need to do before it, and how soon it might come and how little of this life I should waste. But dark undoes me. And cold. But mainly dark.
Posted by melissashook at 4:47 AM