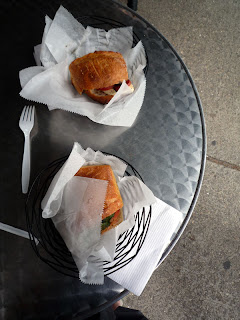 Mim understood perfectly, perhaps instinctively, that I was bewildered by all the possibilities of sandwiches that we might order in the little take-out shop that she likes so much. I almost ordered what she had, but she was intent on making at least a few of the chalk-board choices clear to me, reading the ingredients in the turkey sandwich, mentioning the chicken, tomato, lettuce, mozzarella and spicy mayonnaise that was listed near the top on the right side, too difficult to read myself. I had fastened my hope on a vegetable something that was printed in larger letters, closer to the bottom, easier to read.
But the chicken sandwich she described sounded good. And it was. And so was talking with her.
It hadn't dawned on me that since I'm capable of driving to Davis Square in Somerville, a very big step in this wretched process called convalescence, that I'd be a bit vague about other demands of going out to lunch with a friend. But I didn't have to cover that up or be embarrassed about how long it's taking to be returned to something like the self I was four months ago.
What maxims, those wretched sets of words that come unwanted into your mind at odd moments, had she learned as a child, I wondered. Was her mind cluttered with - a stitch in time saves nine; you can't make a silk purse out of a sow's ear; if it was a snake, it would have bit you; if wishes were horses, then beggars would ride; it's a long row to hoe? My list is mid-western, most of them born of farm work. There are others -- keep your chin up along with that inevitable stiff upper lip and carrying the world on your shoulders. I even concocted some Biblical notion of hiding one's light under a barrel from something I must have overheard. 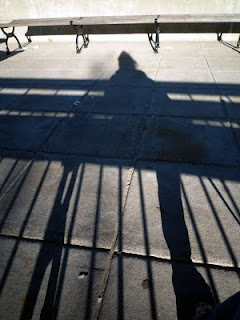 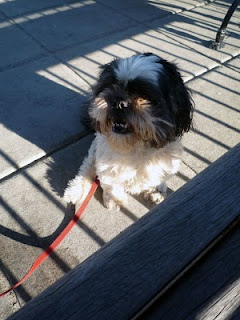 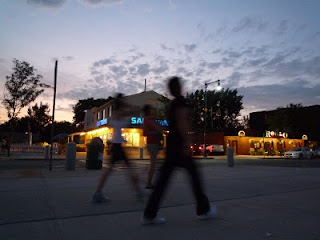 In the last couple of days, Bogie and I went out to Revere Beach for a rice pudding, the only item I find edible on the menu at Santorini's where Krissy, Chris and I had gone for dinner the night before.
That wouldn't have been my choice of restaurants, though I'd been there with  my friend, Joe, the last meal we had together. He particularly liked it because the owners once rented small apartments to folks come from the track and he'd lived in everyone of them, enjoying the breeze from the beach. He'd wanted to take me there so that I could tell his son that he wanted his ashes scattered across from the restaurant since it meant so much to him, a task that I was never able to accomplish since it would have been intrusive in the sad circumstances after his death last fall.
So, I knew that there wasn't really any food that I like on their very complicated menu -- fried this, fried that. But Krissy and Chris had eaten calimari (sp?) there when a friend visited from L.A. and so it seemed like a good idea -- hot night, beach across the street.
I couldn't figure out what to order, so I depended on advice from the counter lady who swore that the hot turkey with green peppers and onions was to die for. She didn't exactly say 'to die for,' but that's what it tasted like before it had the decency to take itself off into the garbage and I ate a little of Krissy's rice pudding, which convinced me that there was something edible on the menu. 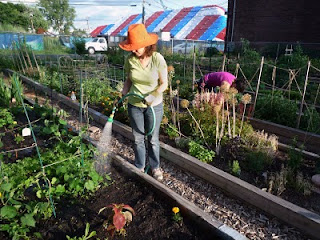 When I first joined the Community Garden in Chelsea, I wasn't well enough to do any of the work, so Krissy took over, planted everything from seed. After two or three weeks, I realized that we could get a second plot that I had enough energy to fuss with. It happens to be booby trapped with an insistent weed that sprouts from the tiniest bit of root left in the soil when you try to dig it out. It wraps itself around them, clinging onto the tomato plants and the zucchini that I planted from seeds that Parker sent.
Krissy is totally possessive about the garden she started and resists my suggestions. Even if I bring out the fact that my beloved grandfather gave me various important gardening hints and that I got my girl scout garden badge (just before my mother died), she wants to learn it all by herself. She's delighted that all the carrot seeds she planted grew, content with a line of green fringe. The concept of 'thinning' them out is not something that she'll consider.
I think we are both surprised by the green beans on the bush beans (she doesn't like green beans and I don't care for them all that much, but they grow quickly and produce nicely!!!). She's delighted that cilantro from seed actually grew. We don't know when onions and garlic are ready to be picked. The lettuce I chose must have been chickory, terrible. The peas were planted too late, but it's fun to watch them reach for the next level of string.
Posted by melissashook at 10:26 AM