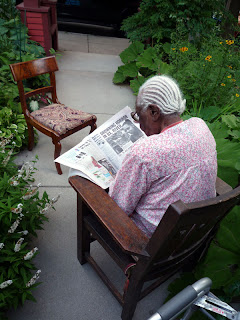 Joyce has always been the most remarkable woman. I met her when Krissy was six or seven, when her children were enough older so that Orson could take her after school and Roma would be around, too. (That's over thirty-five years ago.) When I picked Krissy up, Joyce would tell me stories as we sat in the narrow living room. She was working as a teacher's aid, often catering for events at the church and taking care of a few kids after school. And she had a clear inclination to help anyone, especially immigrant friends from Guyana and the other islands.
She always had a suggestion of some way of solving a problem. And a story about who she'd just met, what so-and-so said, what some child had needed that day and the way she'd attended to that need, how much this cost or that cost, meaning the incredible bargain she found. She had stark white hair, pulled up in a bun and the most incredible face, intimidating and beautiful. I was always slightly afraid of her since she was so much more sure of herself. I didn't know that she was almost twenty years older, but even if I'd been closer to her age, I have never had enough temperament to  match the boldness of Joycie.
Now she's almost ninety, still living in her tiny apartment in Greenwich Village, helped by some very good folks that Orson has arranged to come in for her care. Both Roma and Orson have done a remarkable job of providing support to their determined mother, someone who always supported everyone else and didn't need any help, thank you very much. And people still stop by to see her, to tell her what's been happening in their lives, to get advice. When I first met her, the apartment door was always open. It still is.
I hadn't known that she was in the hospital recently, since I'm not good at following the facebook feeds! So here I was complaining about how long it's taken me to get back to some sense of myself, not knowing anything about the problems Joyce had just had. But, even though she's not been out of the hospital that long, she was very much her self -- giving me advice about something or other, laughing at a wonderful, harrowing, exhausting, hair-raising story that Jim's dinner guest told, enjoying the dinner that Orson, one of the best cooks in the world, made since her appetite has come back now that she's here, happily reading the New York Post that the guy who lives in the upstairs apartment gave her when he got back from work. (The additional bit of flavor was that Roma was visiting, also. Though she's also beautiful and imposing, she doesn't have that touch of the aboriginal indian in her face that Joyce inherited and is far more mellow than her mother was at the same age.) 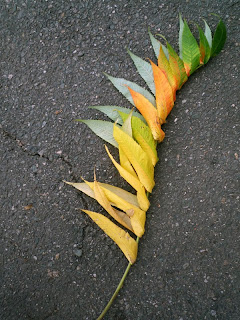 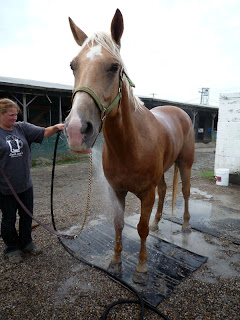 Joyce truly is remarkable.
And so was the branch of leaves that I found on the ground when Krissy and I were walking the dogs near Starbucks.
And so is JoJo (it could be JoeJoe, that seems a little more fitting), this Palimino that I spotted on the walking machine 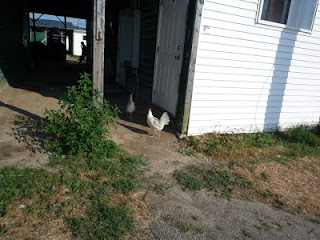 last summer and fell in love with. He's the only horse I've ever taken a fancy to, for sheer beauty. During this meet, Monica has her horse in stalls near JoeJoe's owners so I've gotten to look at  him up close and ask questions.
You can't tell from the photograph that he's the color of butterscotch when he's not wet, with an elegant pale mane and tail. And that he works as a pony, so it's possible to see him leading a Thoroughbred out onto the track before a race.
So.... I learned that he's ten, that his owner got him after her other pony, who she'd had for sixteen years, had to be put down.  JoeJoe was bought at auction because, she thinks,  he must have worked out poorly (to high spirited, perhaps dumping someone off) as a dressage horse (I don't remember the exact name of the type of work he did before, but it involved carting folks around on top of him and performing in some way that she thought he didn't like), but he's excellent as long he's working. If he doesn't go out, pony some horses for training in the morning and on the four afternoons that the Thoroughbreds race, he gets a bit antsy. (I thought she meant annoyed and cranky...)  As long as he's working, his energy is getting burned up and he has a decent disposition.
Anyway, how could I be so lucky as to get close to JoeJoe? My heart throb.
Whatever he's like, he's gorgeous.
Posted by melissashook at 8:33 AM