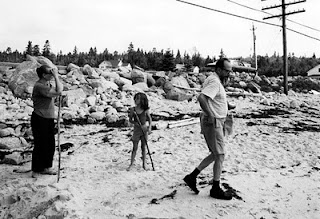 I've been tongue tied recently, and have hardly remembered this blog that I loved writing on. I don't use that word love casually because it was such a pleasure to have no sense of pressure, little self-censorship, while writing it. I was just happy with story-telling.
I'm now like a bug on her back, unable to turn herself over. Maybe I'm just back to my normal self after having been so sick and just glad to be alive. (But my normal self 'loved' writing on the blog.) Maybe it's a dip of depression after getting off Prednisone. And definitely the mood is increased because it's been so dreadfully hot, day-after-day, with 90 degrees and high humidity. Yesterday was the one day when it's been below 80, but another heat wave is expected for the next four days.
When Krissy was little, she spent the summers with her grandparents, Bob and Mari, in Nova Scotia. The hottest day might have been seventy, much cooler in the shade. My father considered it a perfect place to live except for June when the black flies struck. A man hardly given to complain about anything, he hated those black flies whose bites gave him large, painful welts, and grumbled his way to the car, well covered by clothing, or stayed inside until the infestation subsided. 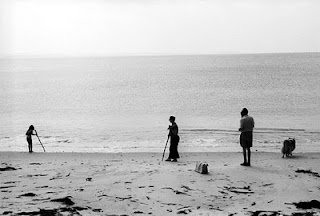 Their house overlooked St. Margaret's Bay and the beach was just a short walk away. When Krissy played at the edge of the water, she quickly turned blue. My father never minded the cold, since his goal was to swim slowly, placidly, assumedly happily, a long time along the shore. That was his favored form of exercise, though he often took walks. I never saw Mari swim in that cold water which took me at least half an hour to creep into, slowly accustoming myself.
One year Krissy found a dilapidated dolly on the beach that she took back to the house and fussed with, bandaging it, putting it to bed under blankets. I got yet another notion for a project -- photographing the recreation of this event to make a childrens' book (I honestly don't know whether there's an apostrophe there. Am I imagining many children possessing it?) And they dutifully enacted the story while I hopped around, taking pictures. As was/is my usual way I forgot about having made this grand plan (that I had no idea how to carry out) and did nothing with the photographs until a few years ago when I scanned them and put them into a short video with an overlapping, differing voice-over of Krissy and I talking about her grandparents. (That's sort of interesting and is on my website. I actually like it, though I haven't lifted my fingers to get it shown anywhere.)
I used to swim a mile and a half a week at the YMCA in Melrose until I sprained my ankle after the freak April 1st snowstorm. Since then I've thought about joining the Y again and swimming in  the summer, something I've never managed to do.
But this year I went paddling in the small outdoor pool in a friend's apartment complex. And it was so wonderful to be in there, my body felt so pleasant to be in, that it gave me the energy to take myself to Revere Beach which is hardly any drive at all. I even bought a blue noodle, 99 cents, Christmas Tree Shop, and beach chairs. I just paddling around in there, floating and watching families play with their children near me, not yet really swimming, but perfectly cheerful with a great sense of freedom. 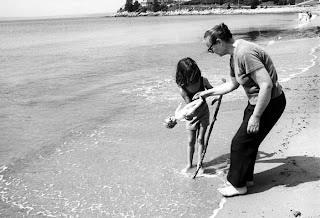 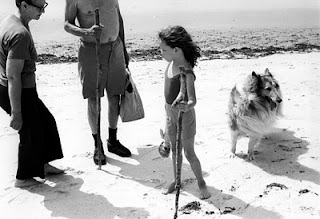 Yesterday I heard a PBS program, scientists talking, suggesting that it's possible that the extended heat wave on the east coast will become normal weather in the future. I happen to think that the theory of global warming is correct, though I'm uncertain whether this is a symptom of it. Our carelessness with natural resources on this planet seem unimaginable and some consequence seems predictable.
Posted by melissashook at 8:03 AM