Today involved fighting with the computer -- to upload files in the order I would like them, to pay for submitting a non-fiction piece. This glorious dog, who I met after I had coffee with Morris, was supposed to be the last entry, but perhaps his bravery has earned him first place. He's tottering onward, as best he can, still capable of bringing happiness to those who have been fortunate to have had his company for many years. 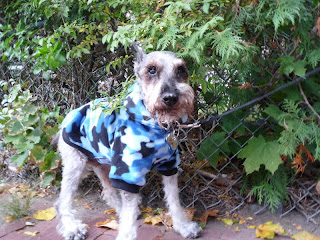 Three of us met for drinks, supposedly, in the decadent and extremely expensive hotel which was made from the Charles Street jail. Mim had read her poetry there a few weeks ago and we'd decided to go back and see what it was like -- on the night before Halloween. The waitresses had to pay for their costumes, something our waitress said didn't bother her since it wasn't expensive, but certainly bothered me. It turns out that the thought of a cocktail, something I haven't had in five or six years, deserted me at the last moment and I had a glass of water as we ate muscles and talked. 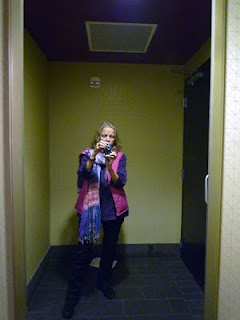 There is something ultimately repellant about the place, even though there is a good deal of information on the walls about the award winning conversion of the space. The rooms, Mim said, are $400 a night. Many features of the jail remain, including various doors with bars in the Clink, the cafe that was expecting a big business of young costumed people. The bathroom, where I took my self-portrait, has exposed brick and cement which might or might not be from the original building. The 'yard' has illuminated seating nicely situated on paving stone. When I was there a month ago, the place reminded me of the last days of the Weimar Republic, a strange disconnect from contemporary life and certainly from the past function of the building.

Mim and I took different subways, but I could look across the track and watch her walk along. After her train came, Charlie Chaplin sat on a bench opposite me until mine arrived. 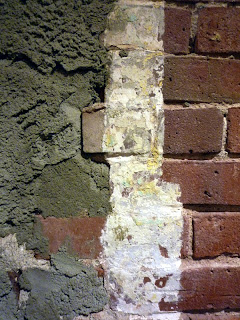 Yesterday I got the chance to video tape someone who had been in that jail, but that experience was just a drop in the bucket to all that happened to him during those rough years. He talked for three hours without drawing breath and would have continued if I hadn't gotten hungry. I can't wait to work with this material and am so grateful for his generosity in talking with me.
I'm feeling vulnerable. For the first time I understood what it means when knees buckle. Mine did last week when I was in Target and I had to hold on to a counter. A nice young woman brought me water. And I recovered, though a residual anxiety remains. I'd asked the doctor when I saw him a month or two ago about why I felt so speedy, but he didn't know. Perhaps I'm just gearing up again, surprised at myself and moving a bit too fast. Hopefully that's the reason, though I don't see how it can explain the feeling of being close to fainting which comes with the thought, "Oh, you're going to faint. That would be awkward."
It's cold and I have to put plastic on the windows.
Posted by melissashook at 1:23 PM