Breakfast at The Bagel Bin, Revere 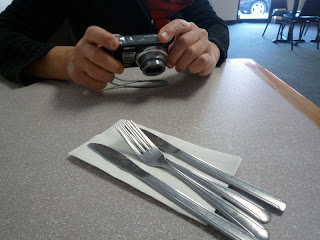 My friend, Chuck Swartz, grew up on Shirley Avenue in Revere. I think that he went to that huge temple that's now been turned into something else though it retains a polite Star of David on the side. Whenever I go to The Bagel Bin, a little restaurant that doesn't serve bagels and is a minute from Revere Beach, I think of him.
I also think of Joe because we'd stop there for breakfast last winter after I drove him to a doctor's appointment because that was his way of repaying me -- buying me breakfast. I always have eggs over and whole wheat toast. And he has a huge omelet with all sorts of, to me, dreadful looking things in it. I took some of the 2008-2009 self-portraits there, while I was waiting for Joe to sit down. They feature my forlorn face, a ketchup bottle and a vase of plastic flowers.
I'm not sure why I hesitated taking Sally there. Maybe it's because I don't really think the food is all that good, except for the bread pudding which is major-league terrific.  But anyway, we went and she had bacon. You can ask the cook to make anything the way you like it and she likes well done bacon, one of the food items that she said is never in her house.
Anyway, it was a perfect choice because Sally likes dives. And a large round table at the back was filled with men talking in loud voices. Anyway, she was facing them so she got to take photographs of me in the foreground and them in the background and told me that they ranged, perhaps, from the late forties to the early seventies in age. The most interesting conversation was about the local election. One of them must have been running for the Council, because they were talking strategies which involved going to various senior citizen houses, having meetings. It became clear that local elections depend on real hand-to-hand work, pulling it together vote-by-vote. That conversation made it clear that one person's vote does count. Then they had a scuffle because someone had written an anti-Semitic letter about another, or maybe had had that letter written about him by someone who wasn't there. It wasn't clear to me, who was merely listening, whether anyone at the table had done this, but I could hear "You're full of shit" and other escalating statements and Sally could watch as one of the guys got up and went out. After that, the fellow who acted as the conciliatory figure, said, "Why'd you wanna do that for?" and then they began talking about baseball and who hasn't learned to speak English in ten years.
Sally wanted to install a recording device for three months in order to get material for the perfect -- script, novel, whatever -- about life in Revere.
This was a Friday morning. Any number of people (probably all retired) seated on both sides of the restaurant. You order your food from the cook, pay the owner, pick up your silverware and napkins and wait until it's brought to you.
Often people come in from the track after training which must be how Joe found out about it. No, it probably isn't because his father lived not that far away, maybe even on Shirley Avenue, and used to rent a room on the top floor to a guy who'd sit up there with field glasses and watch the tote board at the greyhound races for some vague and illegal reason.
No one I knew came in, though a friendly fellow close to my age started a conversation with us because he thought we were sitting there, texting each other. Instead, we were doing what adults like us do, taking digital photographs. Clearly, neither of us can go anywhere without bringing our entertainment. Sally's photographs were much more interesting than mine, but I enjoyed mine, so that doesn't matter. 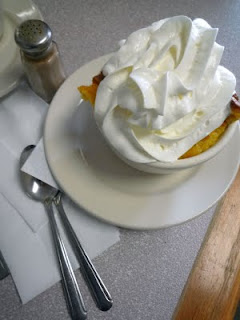 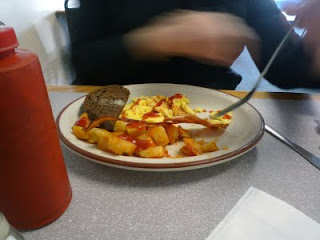 Posted by melissashook at 8:24 AM