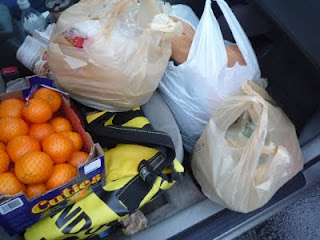 I move fast on the holiday. Otherwise, I would go to bed. Things are actually better. When my daughter was little, she refused to celebrate Thanksgiving because, on her father's side, one of his grandmother's was Cherokee, the other was white. So, why would we celebrate this sorry occasion? If she did come along with me to someone's dinner, she sat silently and never ate turkey. It was easier to go to two or three movies which is, I think, a fine way to spend any holiday.
But it's gotten better for her as long as we don't go anywhere that truly involves a large family of which we are not a part. (Last year we tried that and she had a very hard time.) So, we're going to visit friends who have other folks, husbands, wives, children, single people, a couple of parents who don't belong to the couple throwing the event, but no large extended family...It will be nice. We've been there before. She and her ex are looking forward to it. Or at least she is. She's on a diet of joy which means she looks forward to everything.
I have been moving today, as I was yesterday, though I didn't have a very good start in the morning. Was it the dog shit on my shoe? The mess I made trying to do my own Xerox because the machine ran out of ink and my pages somehow got caught and some were mixed up? "I'm going to put you in a nursing home where there is no Xerox machine." That I had to have that big ms. rexeroxed and she punched it on the wrong side and the pages were out of order? So that my plan to put it in the mail was delayed while I redid all that? And so on.
But the afternoon was good. I got to add a bit more to the text.
And today I'm moving fast so the dark clouds don't catch me. I was at Starbucks at 8:30, working on new stuff. There were three barristers on duty. Danielle, the pharmacist, said that her mother is a very good cook and that she's religious so Christmas is always a good holiday. The other one doesn't love, but doesn't mind, holidays. The guy wished me a H. T. It was early and they were expecting a big crowd by 10. Then the fellow who had a gallbladder operation last week and only stayed in the hospital for 48 hours, who had delusions when he got home from the percoset,  (sp?) was there. We briefly shared a table on Tuesday, and talked about how he felt. He's better today.
I found a Globe and also a left-over from the Sunday Time's, the Book Review, that has this very good article about two new books, Raymond Carver. It was written by Stephen King, I found out after I'd read the whooshing prose, a lot of anger there that seems to be justified, against Lish and against Carver for virtually ignoring the wife who supported him during those early years. From reading the poems, I got a different impression -- that her state of mind was similarly underwater during those hard years when he was drinking and they were trying to raised the children. (I'm not fond of his stories (as edited by Lish), too barren, but I love the poems...they are my constant inspiration.)
I scoop up left-over papers at Starbucks. One goal is to subscribe to or buy the Times everyday, but that's stupid because I can hardly get through one section. Recently I got stuck on that boy with Asbergers who traveled on the subway for 11 days with no one noticing him even though there were signs all around about his disappearance. "I thought I'd be on there forever." How am I going to use that story? I wonder, like I wonder about so many of those articles.   (Fortunately, the dog tore up one about the naming of newly discovered prehistoric crocodiles. But maybe I can tape it together.) 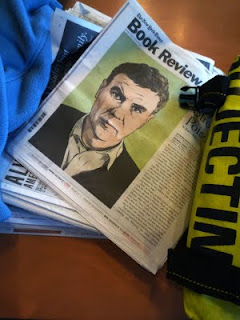 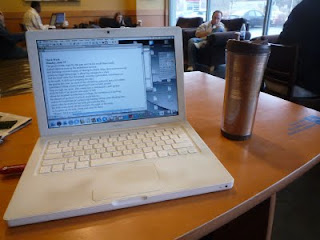 Anyway, another holiday. I should call my brother. He feels just about the same.
Posted by melissashook at 9:38 AM