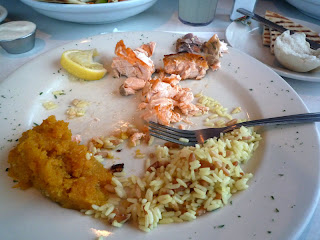 Obviously the most important image on this post is of my almost eaten meal of salmon. PROTEIN. I am not a great fan of protein at best, eating low fat cheese and beans, a little chicken, so I'm probably always low on this fuel. But recently, my attempts at eating it have been very sad, though I could manage to drink the box of peach protein-added gunk (with how many other unpronounceable additives) with lots of ice in the hospital.
But this salmon was my reward for actually teaching yesterday, a feat managed carefully by C. who dropped K. and me off at a building close to the photolab that has an elevator and she walked me in and up the elevator, down the long hall, and got me situated. I had figured out that with 18 students, 3 hours, I could give each ten minutes (TEN MINUTES! holy mackerel!) to try to figure out what they've been doing and how they are managing. Luckily three got there early so I could cross them off my list. I took notes, got e-mail addresses, did the best I could, weakly. But I was glad to be there and happy that they'd had a good critique two weeks before with Margaret, who now had my position and had subbed for me.
By mid-class, I was tottering over to lay out images so I could see the relationship of the photographs. I was too directive, far more than I would have normally been, but in the case of some folks, it seemed necessary to convince them that their projects were interesting and that they should look at more images than they'd chosen, or pare down some, and narrow the focus, etc.
I'm very glad that I didn't stay home. I felt very weak in the morning, having had a couple of nights of increased problems, and would have given anything just to lie there. But, going out was a good decision. 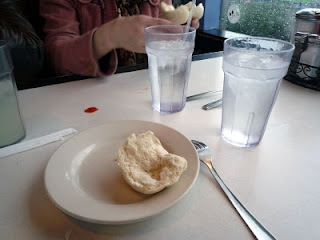 But at 4:30, when I'd seen the last person, I thought of some cheap, chain restaurant (I don't trust the quality of food in them,) but I couldn't imagine where else to go since I was really out of fuel. Fortunately, I remember the Victoria, a restaurant that's changed hands twice in the last few years, since it was sold by the man who'd kept it going, a neighborhood institution for decades. The young guy who waited on us (he looked like an actor) said that the waitresses were still there, those women who'd worked for twenty, thirty years for the same owner.
The menu has gone upscale, pages of possibilities instead of the old, spare double-sided menu. The breaded sole is long gone (he laughed at the idea of such a pedestrian meal), but recommended the salmon. The side order of squash is no longer light in color, bland, but has gotten dolled up and tasty. But the same booths line the front section of the restaurant, giving the appearance of a diner. And the front windows look onto the traffic of Mass. Avenue, and we sat at the back, watching the rain.
The photo with the roll is particularly important. I asked C if he would order me a roll, having the distinct sense that I could starve to death within three minutes if I didn't get something to eat, causing him to get up yet again to fulfill one of my needs. (He must be so tired of me.) And we got three rolls. But what's important is that bit of marinara sauce spilled on the table behind the water glasses. They had lighted breaded zuchinni sticks and I was only allowed to taste one. I could have eaten the whole plate though that would have been a very sorry idea.
That morning I had finally figured out why I've been having middle of the night problems -- taken a worrisome direction. Sour Cream! I'd had it on three baked potatoes, one a day, thinking that when the doctor in the hospital said I could have a little milk in my coffee (I prefer lattes with a shot of espresso), that meant I could have sour cream. I can't. So, my breakfast of baked potato and sour cream had not been agreeable and C. had to stop at Panera and get me three pieces of country white bread with margerine and jelly that I could eat in the car, tossing the crusts carelessly out of the window. That was before we picked up K. at the bus station and then drove out to UMass for my afternoon. 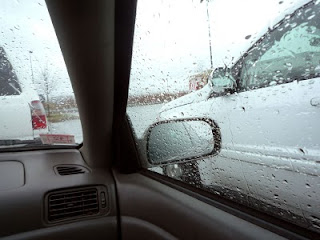 Since I've gotten so much better (relative term), I've been riding myself of little collections....the little stuffed dolls, a rabbit someone once sent in a package for Easter.
And the collection of small metal boxes that I was saving because someday I just might make them into pinhole cameras and use film in them. What an absolutely insane idea! I have read through half a self of books in the last six weeks...gone books. And tossed out three bags of the endless papers. And dumped some clothes. It's slow. I can't tackle much. But it's a start. 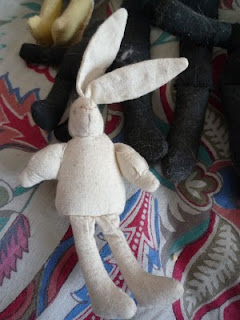 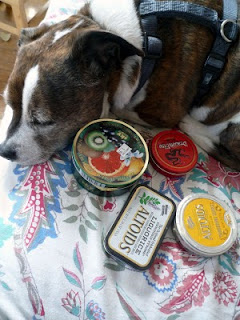 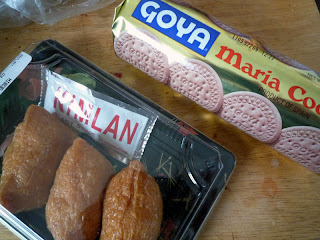 After I ate the salmon, C. commented on how anyone could get well on a diet of inari and Goya Maria crackers was beyond him. And he's right. But that was the food I could tolerate. They would go to the sushi stand in Market Basket where the fellow would look up, nod and immediately begin to make four inari for me. Sweetened rice in a pouch. I wanted to eat all the ginger that comes with it, but settled for three tiny, tiny bits on each rice roll.  The Maria cookies (not very sweet) got me through long nights, as I watched PBS ("Salon Stories," a video about how this downturn has effected wealthy folks, assumedly secure in high paying jobs, on the seemingly unassailable upper east side of New York was quite remarkable....and played often at the odd times I was awake and eating Maria's) Not nutritious, but when you can hardly eat anything else, they taste really good....
So, the hunt for protein goes on. It's a problem if you don't feel like cooking and the restaurants in your neighborhood are really lousy. But that salmon tasted so good.............. Inspiring.
Posted by melissashook at 3:27 AM