a ride through the car wash, a long Sunday 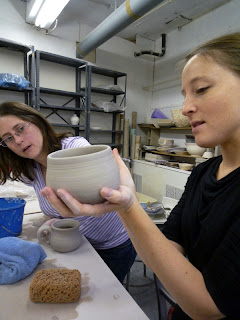 I knew Sunday was going to be a long day, so I decided to take the dogs to the car wash on Saturday as an outing. Bogie isn't entirely pleased that Tulip appeared from nowhere in June. He was used to going everywhere with me and doesn't realize that, in spite of this annoying small dog sticking her nose into everything and barking too much, he still goes whenever and where ever I can take him. But he likes the car wash and I could take him there, at least, since he wasn't going to the opera movie, the poetry reading or to sit in Dunkin' Donuts with my poetry mentor on Sunday.
And I decided to take Happy along, Krissy's dog. She's a slut of a dog and will eat anything and go anywhere except for walks at night. Car was the first word she ever spoke. Three dogs and me, riding through the car wash. 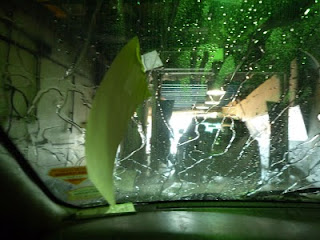 I felt compelled to wash the car because I was picking up a fastidious friend. She has an  elegant sense of design and notices curious details which  makes it interesting to go on outings with her. I always learn something, see something new. Unfortunately, I have the terrible habit of keeping a good bit of clutter in my car and, recently, the outside has been decorated with bird droppings. In the past, she has driven us wherever we went, but now they are down to one car and I've been obliged to drive. (She is a far better driver and knows the best ways to get anywhere, which are never the ways I'm used to going.)
The first time this task fell to me I was so intimidated that I had the car detailed, inside and out. It looked so surprisingly clean that she asked if I'd gotten a new car. But when I picked her up recently, I hadn't done a thing to improve the appearance of my old-lady-tedious-brown-gray-Toyota and she noticed.
I'm not sure that this excursion to the car wash, which involved a long wait in an angry line of drivers all of whom were anxious to get ahead of me, was worth the trouble. Tulip was so frightened by the noises -- water streams, all those suds, the slapping apparatus and the large buffers -- that she crouched near the brakes, missing the whole spectacle. (I took photos so I could show her later.) And the car was so dirty that there was still debris spotting the front hood after the washing, not that this mattered all that much because splats of bird poop appeared by Sunday morning when I dumped Bogie and Tulip downstairs and went off to see Orfeo, a filmed version from LaScala.
Only the 'feed' to the 'server' wasn't working. "What," another friend said, "there are no reels, no film?" The friend that I'd driven mentioned that in Italy or France, there would have been a general uproar over such a long delay, but this audience sat with patience for the hour it took for those young folks managing the technical details to give up on the whole thing and announce that there was no hope, that this opera would be rescheduled, save our ticket stubs, and we'd be given a free ticket for a different opera in the new series. Our small contingent made hissing noises when a woman stood up, announced herself as a lawyer, and offered to sue this struggling non-profit theatre if our money wasn't refunded instantly. $17! 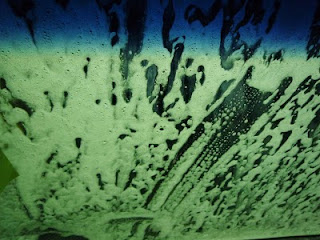 Since I had a couple of hours, I went to Feet of Clay where I continued on with my small job, photographing the goings-on for the website. I used to clean the glaze room, a thankless job that involved a lot of bending and swearing about why people never bothered to clean up around the glaze bucket they'd used, didn't wipe the wall that they'd splashed. Recently I was supposed to mix slip, but whoever did this last took off with the directions. So someone decided that, since I'm a photographer, I might provide images for the website. On Tuesday night, I took over 100 photos and got 15 decent images. That's not a bad ratio in poor light.
One of the feature poets reading at the monthly Brookline Poetry Reading spoke about the pools of blackness outside of his back door, one of those poetic references that always drives me wild because when I open the door, it's to let the dogs out (I usually walk them) and I see Maria in the kitchen next door, doing the dishes, and Carlos just leaving the room. Their daughters must be in other rooms that I can't see into.
The Dunkin' Donuts, where I was meeting George, my poetry mentor, is on the other side of the earth, so I left the reading early. This meeting was very important to me. He has very little left-over time, especially now that he's teaching full time. And has been generous enough to read this long poemish thing that I wrote about working for a couple of hours every morning on the racetrack this summer. Last time we met, we reviewed 70 pages. When I got back home, Krissy said, "You just met with George. Aren't you happy?" But I just wanted to go to bed, filled with a strange disappointment that he'd been so encouraging. (Oh, that circle-eyed-monster-dog-0f-my-unconscious that wants to defeat me was furious!)
George knows that I don't like compliments. (Actually, I don't think that he does either because when I tell him how grateful I am for his support, he says the Greek equivalent of 'oh, pshaw.'
We sat there looking at his suggestions for the last half and talking a bit about this upcoming election for Ted Kennedy's seat in Congress that may, just may, horrors, go to a Republican.
And instead of working on editing that project, here I am, laboring over this long blog....  distracting myself from practical work...  flying these words out into space....
Aren't we humans curious?
thanks!!!!!
Posted by melissashook at 6:56 AM