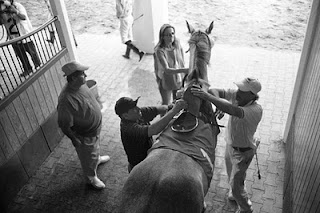 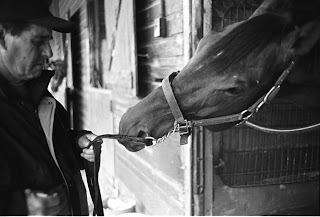 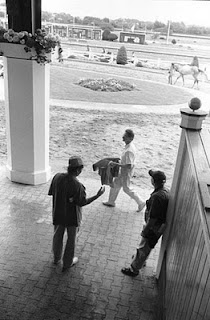 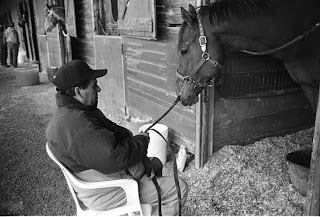 By great good fortune, Joe was standing at the railing watching Clemente ride his horses in the morning that third season I  spent on the backside.  Most folks won't talk to an unknown, older woman who  apparently doesn't have the slightest knowledge of horses and isn't a new owner with pots of money.  But Joe was a talker and I'm a listener. I couldn't be more grateful.
One story Joe told me early on was about the morning his owner (meaning she owned the Thorougbreds he was training) was standing there when Celemente rode by on a white horse, called out, "Look at me, a black man on a white horse," and Joe shouted, "Yeah, jus like a fly in a glass a milk" and the owner almost fell on the ground laughing.
He and Clemente had known each other for years, since Clemente came here from Puerto as a jockey, into his long years as an exercise rider and then, this last year, into his hot walking stage.
This year, they had a fight because Joe would often sit in the Legend's Room at the track, but was too weak to walk over to the window to place his bets, so Clemente took the money, came back with the slips, which often didn't have the numbers Joe had given him, or thought he'd given him, or wanted to give him, or they were numbers that Clemente decided were better, or different because he'd forgotten or misunderstood the penciled scribbles. But Joe didn't have enough money to fool around like this, especially when he could a won 5, 6 hundred dollars, if, if only, Clemente had gotten the numbers right. That was it.
And besides, Clemente really didn't want to notice how ill Joe was when he, himself, was suffering aches and pains from a terrible riding injury some years back that never fully healed since he wouldn't say in the hospital long enough. Or he had an ingrown toenail, ouch, ouch, ouch, ouch. Hurts.
Joe often said, "Another wonderful day in Paradise," when we met at the rail. Sometimes he'd talk about his son, a wonderful kid, not many wonderful kids, really good, "never had ta 'it 'im, such a good kid, 'as good friends, don' do drugs, good kid, wants ta be in law enforcement." When Joe got colon cancer several years earlier, he prayed to be allowed to see Anthony graduate from high school, that's all he wanted, a few more years, jus' let me live ta see 'im graduate, God.
When he struggled with chemotherapy, 38 sessions if I remember correctly, he carried a heavy backpack and walked everyday to build up his strength, played ball with his son, totally motivated by his desire to give this boy a childhood he never had, the guidance of a father he wasn't given because his father left the family and Cuba early on, went back when Joe was fourteen to get him from the school run by nuns where he'd been left when he was six or seven, took him Tampa, lied about his age to get him a Social Security card, put him to work at the track right away. Immediately.
I've written down endless stories that Joe told me. They are far more interesting than I'm capable of writing in this blog. (I'm hideously critical of everything, most especially my own work, so if I say they're interesting I really believe it, that is if you are into vernacular.)

I was lucky enough to know him for the last year he was a trainer, to video tape him talking about his experiences on the backside, and then, when he was too sick to work anymore,  to be able to drive him to doctor appointments where I was allowed to accompanying him into the examining room and take notes. I was fortunate.
Before Christmas, Joe took us to breakfast at Santorini's in Revere, and showed me where he wanted his ashes scattered, telling me to make sure that his son knew this. Then he wanted to make just a little stop at Walmart to buy a truck for his friend's nephew because that little boy, so beautiful you couldn't believe, needed a present, what a beautiful little boy, it's Christmas. I pretended I didn't know why he stood in front of baskets of toiletries, asking which I'd chose for someone or other, maybe the orchid, maybe the rose? And I pretended to be surprised when he gave it to me, along with one of the shiny red bags he'd bought for gifts, just as we got to my car. "You won't take nothin', but I fooled you, didn' I?"
I liked all of that. A lot. But I just hated the wake and the funeral, as nicely planned as it had been by Joe's ex and his son, now a Marine, who gave an eloquent short speech, a send off to the father who had played baseball with him, who had been so proud of his abilities, who loved him and encouraged him to join the military, if that's what he wanted, when everyone else said, "Don't do that," and who he loved. "Thanks, Dad." 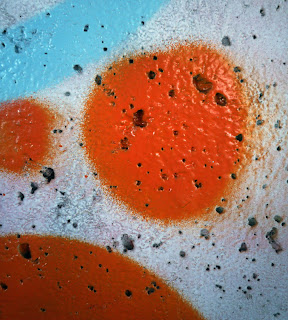 Posted by melissashook at 4:24 AM