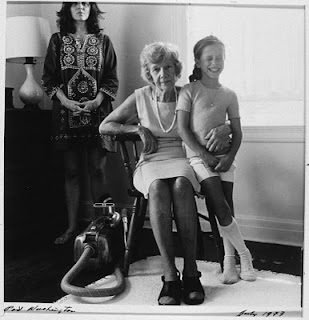 The other night, I found a message from my cousin Patsy on the phone. And I called her back. Unfortunately, we talk only about once a year, close to the holidays.
My cousin Jacqueline and I were the youngest of the family. Pat and my brother were thirteen and sixteen years older. She would have been my role model, had my mother lived, since she'd so successfully moved into an important and interesting professional life in New York. Whenever I could, I looked at the fashion section that she edited in the New York Times Magazine Section, even though I rarely read the Times, never having enough money to buy the Sunday edition.
Often I'm sure that I've aged  into looking just like her mother, Marion, since I don't remember my mother, and my aunt is my model for family resemblance. I look at my blue eyes and see hers, my wrinkles and see hers.
After I'd done a lot of self-portraits, 1972-73, I went on to take more out in Port Washington where we grew up. I love this image of Marion, my daughter, me and the vacuum. I hear Marion, "Lissie, don't show my hands. Please, don't show my hands." She worried that they weren't the hands of her youth, but I find them comforting since they so much resemble the way my hands have become. I remember Krissy asking, "What happened to your beautiful hands? Where are your thin fingers?" That was twenty years ago, when we were eating dinner with Nance in Tucson.
Recently I had a dream in which I was nude, wearing only high heels, standing on Mackey Avenue outside of Marion and Roi's house. Workmen were sanding the floors and one told me that I could stand on the bed in the guest room and vacuum away all the dust I could reach from there. In the hallway, a tattoo artist was creating the most gorgeous shawl, robins egg blue and silver lettering, perhaps in Japanese, across the shoulders and down the back of a man who did martial arts. After he got up to shake out the pain, and sat down again, I felt his foot against mine. 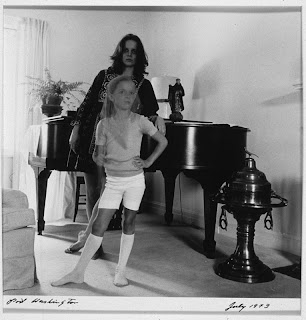 Posted by melissashook at 1:52 PM